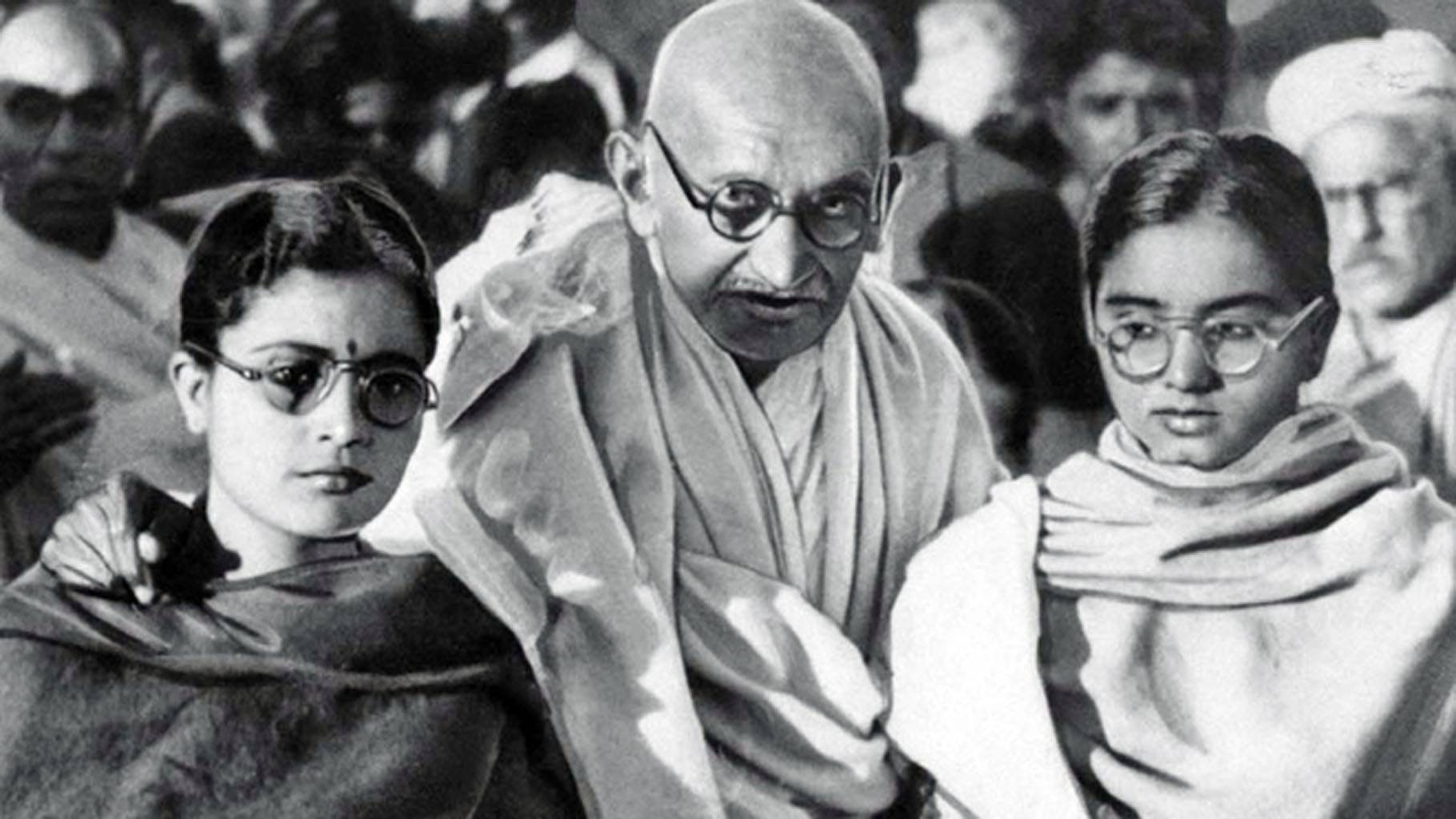 This website is dedicated to discovering, unearthing and capturing truth around the life of so called ‘Mahatma’ who, like any cunning politician,  did everything that is considered immoral, unethical, and even criminal at times but never faced any scrutiny at all. Gandhi’s celibacy experiments or Brahmacharya Prayog is an act that qualifies to check in all of these boxes.

We have written about his experiments with Brahmacharya (Celibacy Experiments) on teenage girls, young women, and other people’s wives in several articles in the past. We have also discussed his relationships with many women that can be easily categorized as ‘extra marital affairs’. Gandhi was a Saint who liked to sleep naked with women. We have established that through our research on his life and his work.

But a brilliant article on Kreately made us write on this topic again and do a bit deeper analysis of Mahatma’s celibacy experiment practices and weigh those against Sanatan values to ask why Hindu society of India and the so-called civilized society of the world didn’t object to his immoral activities the way it should have.

The Kreately article is here. Do spend a few minutes on this brilliant write up:

NAKED GANDHI – THE CELIBATE WHO SLEPT WITH HIS GRANDDAUGHTERS

As the author writes as well, and many of our articles have pointed out that Manu & Abha (both minor and in their teens) were Gandhi’s granddaughters and he slept naked with both of them on the name of his weird experiments with celibacy (he called it ‘Brahamacharya Prayog’).

Some of reference articles on this topic from our collection is listed below. You may need to read them to take a deeper dive on his experiments with young women, other people’s wives and much more.

Gandhi’s Weird Concept of Brahmacharya (Celibacy) and Experiments on Women

Duratma Gandhi was a Monster, not a Mahatma – Abhijit Chavda

Bathing with women, sleeping with naked girls: Read about Gandhi’s ‘experiments with celibacy’

As you dig deeper into Gandhi’s own letters and recorded correspondence around his ‘Celibacy Experients’, it’s clear that these experiments were not always with willing girls and women. He mostly tried the principles of Saam, Daam, Dand, Bhed to get what he wanted (not a very non-violent way of getting things done, isn’t it?)

As the author on Kreately article also writes, the women who expressed reluctance in participating in these experiments with him were first cajoled with high-sounding words( e.g. telling them that he was like their mother and they shouldn’t have any issues sleeping naked with him). But, in a hindsight, one must ask, do people (grown-up men and women) sleep naked with their mothers? It’s hard to find any such examples of recorded mother-daughter relationship from anywhere in the world. But who would dare question the ‘Maha-Atma’!

Those who still refused to give up and surrender to his will were punished by limiting their access to the Mahatma. He even used strong words to chastise them and their husbands in some cases. Unlike how the false narrative has been painted systematically by the historians and propagandists, Gandhi had a strong personality, and it was very difficult to say no to him. Gandhi admitted that himself  in a letter that he wrote to Krishnachandra in which he had admitted that almost all of the women who slept naked with him, would strip reluctantly. But he insisted and they complied. That’s the bottom line.

By now, it is proven beyond doubt that Gandhi’s allegiance was to his British masters while he remained faithful to Islamists. He spoke against Hindu Dharma more than once; he refused to accept Ramayana and Mahabharata as historical facts thus refusing to accept Shri Ram and Shri Krishna as historical figures and Avatars of Lord Vishnu.

But when it came to his experiments on Celibacy, all of his test subjects were Hindu girls and Hindu women. He was not very successful in finding test subjects who were women from other faiths. All of the girls and women who slept with him or assisted him in his experiments with celibacy, were Hindu. That also points to the ignorance of the Hindu Samaaj that not only tolerated this adultery but also kept it hidden from the masses. This same ignorant behavior of the Hindu leadership has been the major cause of the fall of Hindu morale for centuries which continues even today.

This kind of adultery has never been heard from anyone in the history of the world where an old man is proudly sleeping naked with his granddaugher on the name of ‘Brahmacharya Prayog’ and the entire society is either silent, or is in awe of the pathetic man.

His favorite was the youngest of them all, and his granddaughter – Manu. She shared bed with him mostly alone but sometimes with her sister Abha, who joined the grandfather-granddaughter duo a bit later.

Vinay Lal, writing about Manu in his paper, Nakedness, Nonviolence, and Brahmacharya: Gandhi’s Experiments in Celibate Sexuality, writes that At first Manu had slipped under the covers with her clothes on, and apparently “was snoring within minutes of getting into his bed.”

Then, Gandhi told Manu the next day that their purity had to be subjected to the “ultimate test,” and they were to offer the “purest of sacrifices.” He suggested that they “now both start sleeping naked. So, the process of sharing his bed naked, for Manu, began that day.

What is more startling, Gandhi sleeping naked with his teenage granddaughters, and other women, or the fact that Hindu society was being led to believe that there was nothing inappropriate in that and that he was to be revered?

Beginning of the Celibacy Experiments

Mahatma’s was such a master of manipulation and treachery that among the women who took part in sleeping naked with him, there was intense jealousy. His words and conduct with them ensured they competed with one another to be with him.  But it all didn’t start there. He started small, with little affair here, a little there right from his days in Africa. But as he got bolder with time, his experiments also matured.

According to the available documentation, Sushila Nayyar, Sushila Nayar, sister of Gandhi’s personal secretary Pyarelal Nayyar, was probably the first woman to sleep naked with the Mahatma. She explains how these experiments were more like a “nature cure” where Mahatma would ask her to lie to his back when he felt a little pain in his back, and she would do so willingly.

According to the “Collected works of Mahatma Gandhi”, these celibacy experiments began around 1920 when Gandhi had first started resting his hand on the shoulders of young women during his morning and evening walks, whom he had jokingly referred to as his walking sticks. Then came the elaborate daily massage performed by young women in the ashram. The massage was followed by taking bath in the company of his female attendants who assisted him in bathing. Sushila Nayar, who took care of Gandhi since her teenage years, was his regular companion in those bathing experiments. Gandhi had claimed that he didn’t look at Sushila while taking bath together, saying he used to keep his eyes tightly shut. Such modesty!

In the beginning of his experiments, according to some of the available writings, Baapu would have Parbhavati snuggle close to him to keep him warm at night while she remained fully clothed. He would also keep these experiments secret from other Ashramites. Imagine the luxury the poor Mahatma enjoyed while India fought the mighty British for her freedom. Usually, if someone felt cold, they’d ask for an extra blanket or two. But Gandhi preferred to have a woman warm him up, and he had them available whenever he desired.

The truth about Gandhi has been hidden from the masses for way too long. The world needs to know the truth about the false Mahatma who was neither non-violent, nor a Mahatma. Instead, he was merely a crooked politician who played at the hands of British to delay India’s freedom while enjoying material benefits his collaboration with the British brought to him.