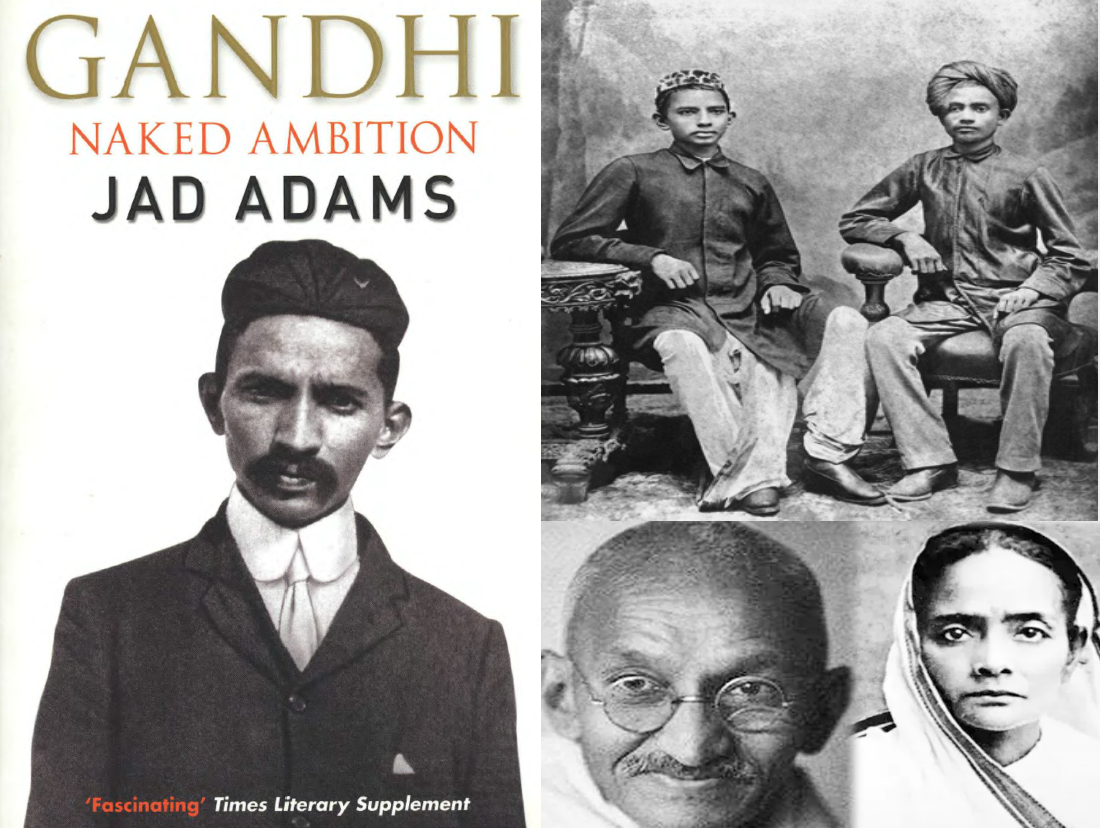 In this article, we analyze Gandhi’s character as a teenager, his actions, his thought process and how he saw his childhood when he was a grown man. We focus in this article on his character of not owning upto his mistakes and looking for others to take the blame on his behalf. You will see how.

Jad Adams wrote a book by name “Gandhi: Naked Ambition” in which he captures details from Gandhi’s own autobiography and other sources of authentic information on Gandhi and shares his analysis. The book reveals aspects of Gandhi’s life that have not been analysed or judged on moral grounds. Let’s discuss some of those here.

Mohandas Gandhi In His Adloscent Age, His Marriage and His Actions

Gandhi was married when he was about 13 years. He also was born in a Vaishnava family which means there must have been daily prayers (if not multiple times a day) and nobody in the family ever touched meat, and it’s known that his mother was a very religious lady. One can perhaps imagine that Gandhi would have at least inherited these basic family values knowing that he went on to become a ‘Mahatma’ later on.

On the contrary, Gandhi had developed a deep friendship and trust with a Muslim boy, Sheikh Mehtab who was a friend of his brother. Jad Adams shares a detailed write-up about that episode on pages 15, 16, and 17 of his book. Gandhi’s mother, his brother and even his wife advised him to stay away from Sheikh Mehtab. But Gandhi was so attracted to the boy that he couldn’t leave his association. Not only that, Gandhi ate meat, went to brothel with the boy, smoked and lied under his Sheikh Mehtab. Jad shares this in this book:

Gandhi bought into that idea as, like any other young man, he wanted to chase away the British from India. So, he convinced himself that meat-eating was a duty. Then, Mehtab did the rest, and in the setting of an attractive dining room and given meat delicacies cooked by a chef, Gandhi found a taste for non-vegetarian dishes. He ate meat till he was about 15 years of age. He had no problem eating meat anymore. But around the age of 15, he had a feeling that he was cheating on his parents and so at some point he decided to stop eating meat till his parents are alive.

There is a mention of Gandhi having a discussion with Mehtab about his sex life and at that moment Mehtab took him to a brothel for whatever education he thought was necessary for Mohandas to get from there. Gandhi went there too!

When we read Gandhi’s autobiography, the mentions of these things read like ‘the temptations of Gandhi’. He tells of how he was misled into smoking, stealing, meat-eating, and having sex but he found ultimate sanctity in rejecting these diversions from the true path. He even remarks that the suspicions he developed about Kasturba were also nurtured by Sheikh Mehtab himself and Gandhi had no role in it. 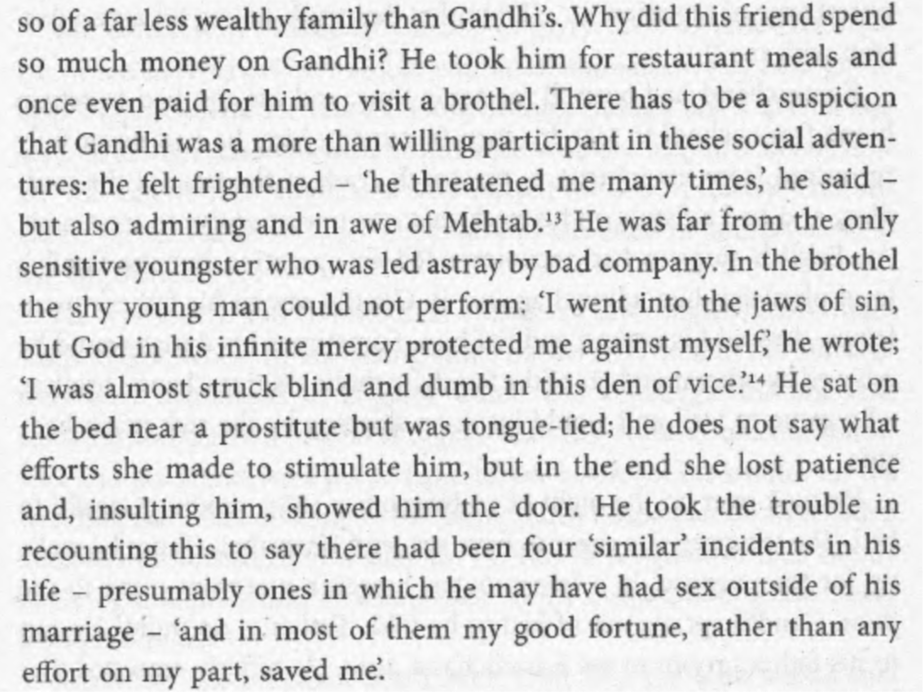 So, essentially, the adult Gandhi takes no responsibility for the childhood misdemeanors he chose to engage in under the influence of Sheikh Mehtab or Kasturba or somebody else. He claims that he was just a little child who was tempted into those things and others misled him into them and he was so virtuous that he was saved from all those temptations through divine intervention. If we choose to trust him, he never did anything wrong. He ate meat, that was Mehtab’s fault. He had sex or he went to a brothel, but that was somebody else’s fault too. He smoked because somebody else made him do it.

Gandhi’s life is full of incidents where he made mistakes, blunders and many times, committed crimes. But we never find him accepting them or owning up to them until it suited him or helped him enhance his image for a bigger gain.

For example, he mentioned in his autobiography aforesaid incidents only to gain people’s sympathy to make people think, “oh, poor Mohandas was misled by the bad boy, Mehtab…” But what we need to realize is that the other kid was also around the same age. So, why Gandhi was so influenced to follow that boy’s footsteps unless Gandhi wanted to engage in those activities out of his own desire?

We have seen how grown-up Gandhi led Indians into Khilafat movement and then put the blame Hindus squarely on the Hindu community when Moplah Muslims massacred many thousands of Hindus as a result of that movement that Hindus had only participated to help their Muslim brothers on suggestions from Gandhi.

We have seen how Gandhi called Abdul Rashid ‘brother’ after Rashid murdered Swami Shraddhanand in cold blood and put the blame on newspapers and others. But he never condemned Abdul Rashid or apologized even when top leaders and intellectuals such as Dr. Ambedkar, Veer Savarkar, and many others criticized his stand.

Gandhi first promised that he will never let the partition of India happen and Indians voted wholeheartedly for Congress trusting him. But he took a U-turn and got the partition resolution passed by the Congress Working Committee and betrayed the nation. But he never accepted that as a mistake or a blunder or even as a crime. He never apologized for his betrayal of the nation. He blamed everyone else but himself for over 2 million deaths that happened as a result of the partition of India in 1947.

In the closing of this analysis, one thing is clear Gandhi was a weak person, not just physically, but also mentally. If we take his words that he had indulged in smoking, meat-eating, lying, visiting brothels with his friend because he was tempted or misled by others, it still proves that he was mentally so weak that he had no self-confidence, or ability to rationally analyze the consequences of his own actions. He had no moral compass. He had no respect for his family’s traditions or even the religion in which his mother was so devoted. He got tempted because he enjoyed in those immoral activities even though he was misled.

But if we refuse to accept his argument where he wants us to blame Mehtab, Kasturba, or anyone else for his own folly, then Mohandas Gandhi comes across as a shroud politician who is willing to lie and cheat just to gain higher moral ground and sympathy from others.

In either case, he doesn’t come across any ‘Maha Atma’ that he has been projected as. Neither in his childhood nor in his adulthood does there seems to be a great example of strong character in Mohandas’s life. He comes across as a weak, timid, opportunistic child when he was young and he seems to continue to have the same personality throughout his life to a larger extent, he succeeded in getting what he wanted because the British were cunning and Indians, especially Hindus of India were foolish.

‘Mahatma’ Gandhi never accepted his mistakes, no matter what area of life we discuss. He always blamed others for his mistakes and always sent people on guilt trips using blackmailing and sentimental words. He was a crooked man, a duratma, never a maha-atma. Indian people need to realize that and remove Gandhi from all discourses, especially from the ones that are around truth, honesty and honor. Gandhi was neither truthful, nor honorable!