Khlafat movement was imposed on India by the father of the nation while she was in the middle of her struggle for Independence. World war had just ended with the dissolution of the Ottoman Empire. But Gandhi decided to start a movement in India that had nothing to do with India’s independence struggle. He persuaded Congress to support the Khilafat Movement – a violent agitation for restoring the Islamic Caliphate deposed by the victorious British.

Before long, he pinched his nose and plunged into the murky waters of religious appeasement for his Muslim brotherhood and dream of becoming ‘the new age prophet’ he was fantasizing about.

Although it was a pernicious political stunt by Gandhi, the Khilafat Movement was actually started by the Muslims. It was taken up by Gandhi with tenacity and faith, which must have surprised many Muslims themselves. However, what followed the Khilafat movement of Gandhi was mindless fanaticism by the Moplah Muslims that resulted in the brutal murder of over 10,000 Hindus, the rape of thousands of Hindu women, and the desecration of many temples. In 1921, the Moplah Muslims went on a murder frenzy during the Malabar massacre killing Hindus most brutally. On one particular incident on the 25th of September 1921, the Moplah Muslims massacred 38 Hindus by beheading them and throwing them in the well. It has been documented by the district collector of Malabar how even after 2-3 days, several Hindus who were beheaded and thrown in the well were crying out for help. 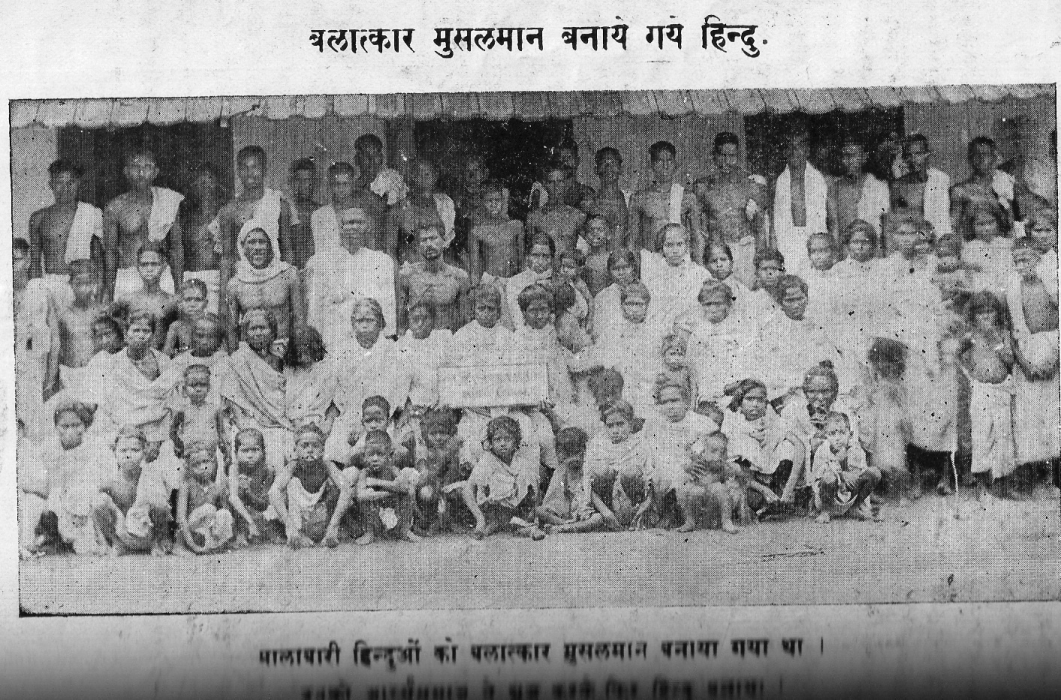 It took more than four months for the British to control the rebellion. The official records show 2,266 killed, 1,615 wounded, 5,688 captured, while 38,256 surrendered during military engagements.

As Dr. Ambedkar wrote about the agitation and the incidents that followed:

The Muslim agitators preached the doctrine that India under the British Government was ‘Dar-ul-Harab’ [The Abode of War; a place where the Muslims are not in power] and that the Muslims must fight against it, and if they could not, they must carry out the alternative principle of ‘Hijrat’.

The aim was to establish the kingdom of Islam by overthrowing the British Government. Knives, swords, and spears were secretly manufactured, bands of desperadoes collected for an attack on British authority. On 20th August, a severe encounter took place between the Moplahs and the British forces at Pinmangdi. Roads were blocked, telegraph lines cut, and the railway destroyed in a number of places. As soon as the administration had been paralyzed, the Moplahs declared that Swaraj had been established. A certain Ali Mudaliar was proclaimed Raja, Khilafat flags were flown, and Ernad and Wallurana were declared Khilafat Kingdoms. As a rebellion against the British Government, it was quite understandable.

But what baffled most was the treatment accorded by the Moplahs to the Hindus of Malabar. The Hindus were visited by a dire fate at the hands of the Moplahs. Massacres, forcible conversions, desecration of temples, foul outrages upon women, such as ripping open pregnant women, pillage, arson, and destruction – in short, all the accompaniments of brutal and unrestrained barbarism, were perpetrated freely by the Moplahs upon the Hindus until such time as troops could be hurried to the task of restoring order through a difficult and extensive tract of the country. This was not a Hindu-Moslem riot. This was just a Bartholomew. The number of Hindus killed, wounded, or converted is unknown. But the number must have been enormous. [reference to the St. Bartholomew’s Day massacre in 1572].

Unlike how Gandhi has been portrayed to the masses under the Congress Rule for about 70 years and even how the Modi government continues to peddle the same story, Gandhi’s reaction and responses will shock you as you read this story. Let’s continue…

In response to the Moplah genocide of Hindus, ‘Mahatma’ Gandhi laid the blame squarely on the Hindus. He said:

Hindus must find out the causes of Moplah fanaticism. They will find that they are not without blame. They have hitherto not cared for the Moplah. They have either treated him as a serf or dreaded him. They have not treated him as a friend and neighbour, to be reformed and respected. It is no use now becoming angry with the Moplahs or the Muslims in general.

Gandhi was not satisfied yet with his rationalization. Therefore, he went further and blamed everyone else for the Moplah barbarity. But he never uttered a single word of condemnation for the Moplahs themselves. He said:

The Government has thoroughly exploited the Moplahs’ madness. They have punished the entire Moplah community for the madness of a few individuals and have incited the Hindus by exaggerating the facts. Malabar Hindus, like the Moplahs, are an excitable people, and the Government has incited them against the latter.

The outbreak would not have taken place if the Collector had consulted the religious sentiment of the Moplahs.

One of his contemporary intellectuals, and usually, Gandhi’s critique because he knew how Gandhi’s character was of a ‘Chatur Baniya,’, Dr. Ambedkar, clearly and categorically observed that the Moplah rebellion was nothing but jihad. Indeed, Muslim leaders themselves agreed with Ambedkar.

Maulana Hasrat Mohani, the eulogized freedom fighter and a friend of the Mahatma, and one who had coined the slogan “Inquilab Zindabad,” justified the massacre of Hindus by saying that this was Islamic Jihad and that according to the rules of jihad, those who help the enemy become enemies themselves.

Shockingly, Mohandas Karamchand Gandhi, the non-violent ‘Mahatma,’ who was of the view that Chhatrapati Sivaji Maharaj and Rana Pratap like legendary kings were ‘misguided patriots’, was conciliatory towards the Maulana even in that situation and said:

I do not blame the Maulana. He looks upon the British Government as an enemy. He would defend anything done in fighting it. He thinks that there is much untruth in what is being said against the Moplahs, and he is, therefore, not prepared to see their error. I believe that this is his narrowness, but it should not hurt the Hindus. The Maulana speaks what is in his mind. He is an honest and courageous man. All know that he has no ill will against the Hindus.

In spite of his amazingly crude views about religion, there is no greater nationalist nor a greater lover of Hindu-Muslim unity than the Maulana.

Gandhi continued to bat on behalf of his ‘Muslim brothers’ and added further:

Forcible conversions are horrible things. But Moplah bravery must command admiration. These Malabaris are not fighting for the love of it. They are fighting for what they consider is their Religion and in the manner they consider religious.

After praising them for their bravery and defending their acts as religious, now it was his turn to advise Hindus and remind them of their ‘Dharma’ according to him. Now, he said this to Hindus:

Even if one side is firm in doing its dharma, there will be no enmity between the two. He alone may be said to be firm in his dharma who trusts his safety to God and, untroubled by anxiety, follows the path of virtue. If Hindus apply this rule to the Moplah affair, they will not, even when they see the error of the Moplahs, accuse the Muslims.

I see nothing impossible in asking the Hindus to develop courage and strength to die before accepting forced conversion. I was delighted to be told that there were Hindus who did prefer the Moplah hatchet to forced conversion.

Even so, is it more necessary for a Hindu to love the Moplah and the Muslim more when the latter is likely to injure him or has already injured him. Why should a single Hindu have run away on account of the Moplahs’ atrocities?

Dr. Ambedkar criticized Gandhi’s stand on the Moplah Massacre and said this:

Mr. Gandhi has never called the Muslims to account even when they have been guilty of gross crimes against Hindus.

Mr. Gandhi has never protested against such murders [of prominent Hindus like Swami Shradhanand, Rajpal, Nathuramal Sharma]. Not only have the Muslims not condemned these outrages, but even Mr. Gandhi has never called upon the leading Muslims to condemn them. He has kept silent over them. Such an attitude can be explained only on the ground that Mr. Gandhi was anxious to preserve Hindu-Moslem unity and did not mind the murders of a few Hindus if it could be achieved by sacrificing their lives.

Ambedkar continued and called Gandhi’s bluff with regard to the Moplah massacre, something he had condemned in the strongest of terms already:

This attitude to excuse the Muslims any wrong, lest it should injure the cause of unity, is well illustrated by what Mr. Gandhi had to say in the matter of the Moplah riots. The blood-curdling atrocities committed by the Moplahs in Malabar against the Hindus were indescribable. All over Southern India, a wave of horrified feeling had spread among the Hindus of every shade of opinion, which was intensified when certain Khilafat leaders were so misguided as to pass resolutions of ‘congratulations to the Moplahs on the brave fight they were conducting for the sake of religion’. Any person could have said that this was too heavy a price for Hindu-Moslem unity. But Mr. Gandhi was so much obsessed by the necessity of establishing Hindu-Moslem unity that he was prepared to make light of the doings of the Moplahs and the Khilafats who were congratulating them. He spoke of the Moplahs as the ‘brave God-fearing Moplahs who were fighting for what they consider as religion and in a manner which they consider as religious’.

Vinayak Damodar Savarkar served his transportation for a life sentence at the Cellular Jail of Andaman Islands. He didn’t have many avenues to write and criticize Gandhi at the time. But as soon as he got the opportunity, he published his novel by the name ‘Moplah’ in Hindi. That book is a must-read for you if you want to know what happened during that period.

Moplah massacre and Khilafat movement details are also captured by Vikram Sampath in his biography of Veer Savarkar.

Here is a video where Anand Ranganathan explains how Mahatma Gandhi condoned the horrific, barbarian acts on Hindus by Muslims during Moplah Riots which incensed Dr. Ambedkar. You should watch it:

These authentic accounts of Gandhi’s actions, speeches, and writings with respect to the Moplah Hindu massacre are examples of Gandhi’s anti-Hindu, anti-national attitude just to please Muslims. There are many other examples, and each deserves a separate post.

Another detailed posts with related information about Moplah Hindu massacre is documented here. Feel free to check it out:

What MK Gandhi said while Moplah Muslims massacred thousands of Hindus in 1921: Support to Khilafat and asking Hindus to die without a fight

Let’s not forget that none of these incidents are present in any history textbooks. Our central governments have been purposefully hiding these and banning books that tried to expose the fraud of ‘Mahatma’ Gandhi.