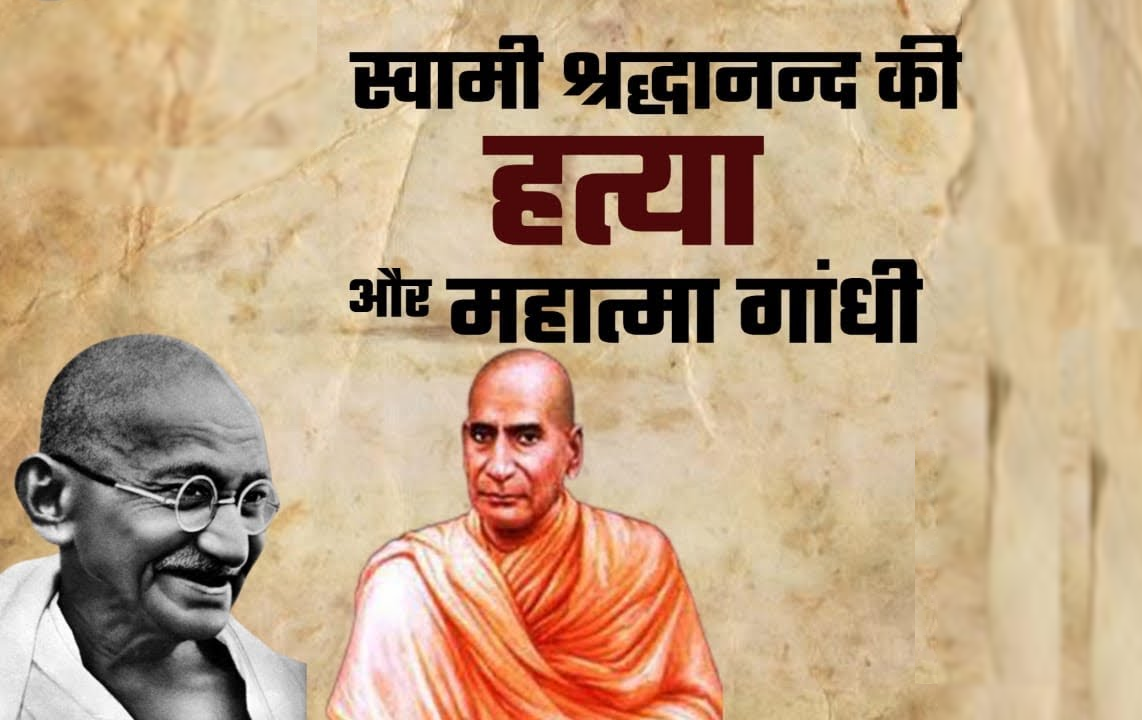 Gandhi’s love for Islam, his refusal to condemn any or every act of terrorism by Islamists could be understood once more by studying the murder of Swami Shraddhanand of Arya Samaj by the first Islamic terrorist of the 20th century, Abdul Rashid.

Swami Shraddhanand was a renowned Arya Samaji, a disciple of Swami Dayanand, and a senior leader of the Congress party. As a disciplined soldier of the freedom movement and his close association with ‘Mahatma’ Gandhi, he participated actively in the Khilafat movement.

The Murder of Swami Shraddhanand by Islamic Terrorist Abdul Rashid

Swami Shraddhananda was a disciple of Swami Dayananda Saraswati, the founder of the Arya Samaj, and he was the leading voice of the ‘Shuddhi’ movement, which has gained momentum with the help of Veer Savarkar and  Hindu Mahasabha to re-convert and bring back those who had converted to Islam against their will. The movement had caught momentum, and hundreds of people were being brought into the Hindu fold, and Swami Shraddhanand was actively running and monitoring these activities across India.

Swami Shradhhanand was also very close to Gandhi. So much so that when Gandhi’s first son Harilal converted to Islam, Gandhi sought Swamiji’s help to perform Shuddhi to re-convert Harilal back to Hinduism. Those efforts were also fruitful, and Harilal was converted back to Hinduism.

These activities angered Muslims true to their religious compulsion, where they wanted to convert every living being on the planet to Islam, but they never wanted anyone to leave Islam. They were trying all tricks in their book to convert people to Islam. But they hated Swami Shradhhanand’s ‘Shuddhi’ movement as it began to nullify their efforts as people were switching back to their original faith because of Swamiji.

Just a couple of months before the assassination of Swamiji, a Muslim woman along with her children approached Swamiji and expressed her desire to return to Hinduism. Riding on insecurity, her husband took Swami to court on false charges of abduction of his family. The court rightly quashed the allegation by dismissing the plea and setting Swami Ji free. This verdict made Muslims extremely angry and prompted them to seek revenge.

Therefore, an Islamic terrorist, young Abdul Rashid, took it upon himself to act and visited Shraddhananda’s residence at Naya Bazar in Delhi on December 23, 1926, on the pretext of discussing “some problems of the Islamic religion.” Swami Shraddhanand was unwell and lying on his bed. Initially, Dharam Singh, Swamiji’s attendant at the time, hesitated to let that man in. But Swamiji invited Abdul Rashid inside as the man was begging to see Swamiji urgently. So, hesitantly, Dharam Singh allowed Abdul Rashid inside.

The visitor then asked for a glass of water, and then, while Dharm Singh was taking his glass away, Abdul Rashid rushed up to the Swamiji and fired two bullets point-blank into his chest. Swami Shraddhanand died as a result of that assault but Abdul Rashid was captured by Dharam Singh and eventually he was hanged.

Just a few days later, the annual session of the Congress was taking place on December 25, 1926, at Guwahati. All the senior leaders, including Gandhi, were present at the session when the news of the gruesome murder of Swami Shraddhanand came in. There was a widespread atmosphere of despondency and depression among Hindus due to the cruel assassination of Swami Shraddhanand.

An ignorant Gandhi (or should we call him, Maulana Gandhi) left everyone dumbfounded by addressing the assassin and the treacherous Islamic killer Abdul Rashid as “Bhai Abdul Rashid.” Gandhi moved a condolence motion himself and said this:

If you hold dear the memory of Swami Shraddhanandji, you would help in purging the atmosphere of mutual hatred and calumny. Now you will perhaps understand why I have called Abdul Rashid a brother, and I repeat it. I do not even regard him as guilty of Swamiji’s murder. Guilty indeed are all those who excited feelings of hatred against one another.

Everyone was shocked to hear Gandhi speak like that, where Gandhi directly held Swami Shraddhanand responsible for his own death by stating that he was propagating hatred through his Suddhi movement. This was Gandhi’s distinctive trademark, of contradicting himself, by conveniently forgetting that he was the one who wrote in the obituary note for Swamiji: “He (the Swami) lived a hero. He died a hero.”

This shows the innate hatred Gandhi had for all the Hindus. Hindus keep calling him a ‘Mahatma’ whereas Gandhi never considered himself a ‘Hindu,’ as discussed in many other articles before.

By the way, at the very same Congress session, funds were collected for the legal defense of Rashid in the courts. All of this was done while Gandhi was at the helm of the Congress.

Gandhi’s repeated reference to Abdul Rashid as a ‘dear rother’ caused a lot of consternation among an already agitated crowd, and Gandhi sensed it. So, in an attempt to clarify his stand further, he spoke again on the following day, which did not make matters any better either. He was hell-bent on creating sympathy for that terrorist. He said:

Brother Abdul Rashid was shown in. I purposely call him brother, and if we are true Hindus, you will understand why I call him so. . . . .The murder has been possible because the two communities took upon each other with feelings of hatred and enmity. . .

That was not enough for Gandhi. In a Young India essay dated 30 December 1926, Gandhi further elaborated:

I wish to plead for Abdul Rashid. I do not know who he is. It does not matter to me what prompted the deed. The fault is ours. . .

It is unnecessary to discriminate and apportion the blame between the rival parties. Where both are to blame, who can arbitrate with golden scales and fix the exact ratio of blame? It is no part of self-defense to tell lies or exaggerate. . . . .’

Intellectuals of the time and nationalists such as Dr. Bhimrao Ambedkar and Veer Savarkar had sharp reactions to Gandhi’s attitude, and they condemned Gandhi in their own ways.

Veer Savarkar was disgusted by Gandhi’s rationalization and the absence of unequivocal condemnation of Abdul Rashid’s act. In a sharp riposte to these utterances of Gandhi, Savarkar wrote an essay titled, ‘Gandhiji and the Innocent Hindus’ on February 10th of 1927 condemning the addressing mode of ‘brother’ for a violent assassin. Savarkar wrote that it was alarming that the Hindu community had quietly decided to follow Gandhi’s dictates. Savarkar questioned why Gandhi thought Abdul Rashid was his ‘dear brother.’ Still, the same Gandhi would not address the 18-years old Gopinath Saha too as a brother who had attempted to murder Charles Tegart, the then head of the Detective Department of Calcutta Police. In that essay, Savarkar concluded that Gandhi would not sympathize with Gopinath Saha because he was a Hindu which made him a dastardly assassin. It suited the narrative of the ‘Mahatma’ Gandhi.

Dr. Bhimrao Ambedkar believed that Gandhi was very anxious about Hindu-Moslem unity. He didn’t want these killings of Hindus resulting in Hindu-Muslim fights. Hence, he kept downplaying Islamic barbarism over Hindus. He, in fact, praised the Malabar revolutions when it was known that Moslems killed thousands of Hindus and converted many of them. He put the blame squarely on Hindus, as we have already discussed.

The thing that Indian people need to remember is that Gandhi was an Indian Congress Party leader who founded the principles which Nehru and the rest of the Congress chose to follow. The strategy of the congress party in the last 100 years has been that of dining with the Muslim Right-Wing, flirting with the Hindu Right-Wing, and obtaining majority votes from the centrist majority. Here are the two startling revelations about Gandhi’s behavior (and that of Congress) that come out with regard to Swami Shraddhanand’s murder by Abdul Rashid and what followed next :

Referring to an assassin as ‘Bhai’ itself says a lot about the Congress line of thinking. Gandhi started this culture of Congress, and Digvijay Singh of the Congress party, a few years ago, referred to the terrorist Osama Bin Laden as “Osama Ji.” This unconditional love for even the wrong people is the trademark of the Congress party seeds, which were sown by ‘Mahatma’ Gandhi when he was the man-in-charge.

In the Guwahati meeting of INC, Gandhiji also said various things about the killer, Abdul Rashid, to calm the supposedly angry audience. Some of which included things like Gandhiji personally did not have any anger against the killer, and the listeners should also think like Gandhiji. This again is a hallmark congress party line of thinking that has dominated the political spectrum of India since Independence. Even today, the line of thinking of the politicians who follow ‘Gandhiwad’ is that peace must be maintained regardless of who the victim or aggressor is. Justice was not the priority for Gandhi, neither it is for those who follow Gandhi. All Gandhiwadis choose to appease the oppressor in search of peace even when it means injustice for the oppressed.