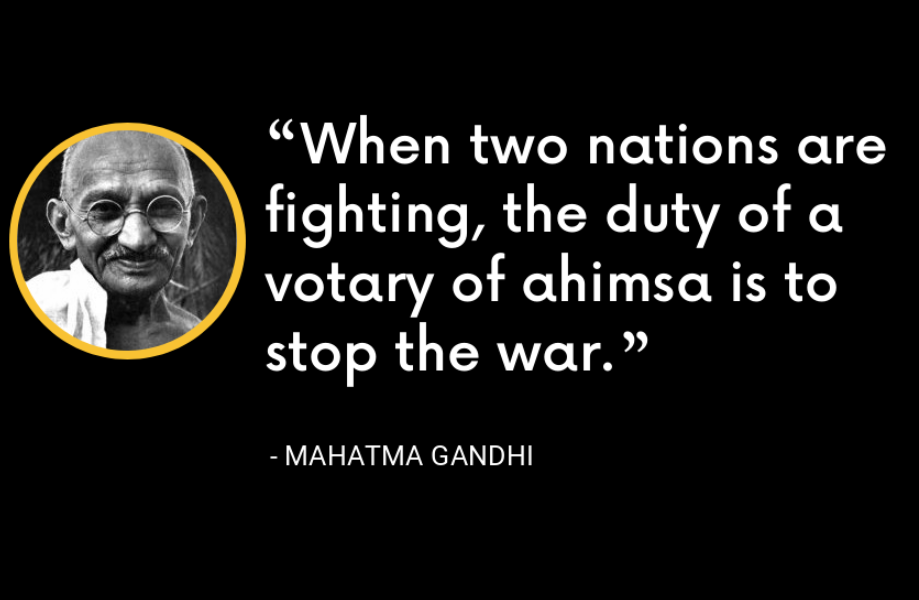 Gandhi was just a normal human being like any other, whose standards changed with time depending on the situation at hand and with the idea of benefiting from it. But the other people made him ‘Mahatma’ and ‘father of the nation’, aiming to benefit from establishing Gandhi in the minds of ordinary people as a person larger than life. They succeeded in their mission, too…until now.

Today’s topic of our discussion is Gandhi’s own principle of non-violence and whether the life he lived demonstrates the effect of this principle in his conduct.

We have already discussed what Ahimsa or non-violence means in one of our previous posts and how he violated those principles in his personal life, as described by his wife, Kasturba Gandhi herself. Check out that post and get familiar before continuing. We are going to discuss how he lived that principle outside his home and while dealing with the British also.

First of all, he believed that if he could demand rights as a British-Indian citizen, it was also his duty to defend the British Empire in its time of need. He said:

“We are sons of the Empire after all.”

Without going into the details of whether or not his attitude of ‘loyalty to the Empire’ is questionable, we want to focus on his principle of ‘non-violence’.

So, to serve the Empire, in complete knowledge that he was a country that was slaved by the same colonial power that was attacking another republic to enslave them, Gandhi decided to help his oppressors in enslaving another country. He did not protest in front of the British to not wage war on those people. Instead, he formed a team, and more than a thousand Indians responded to his call. 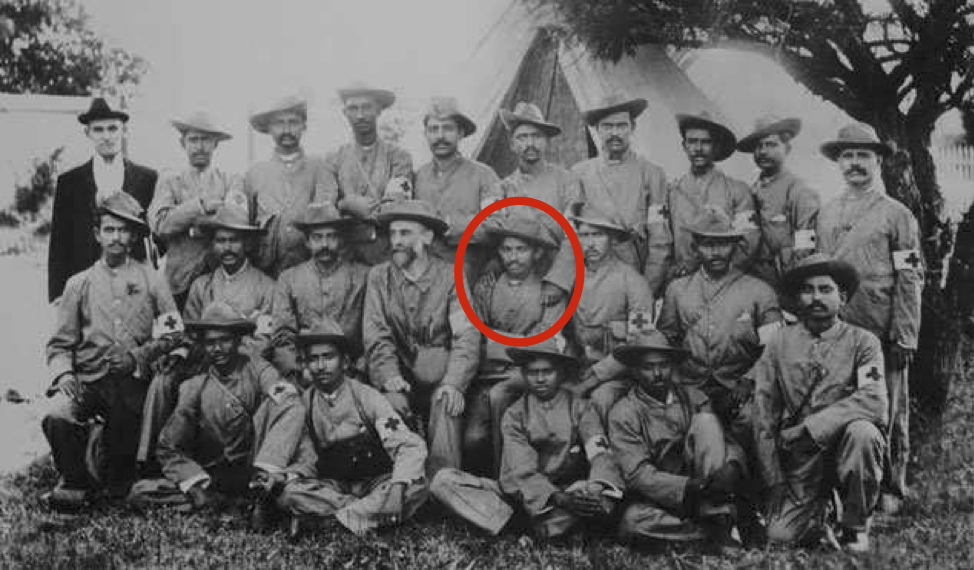 Indeed their efforts were acknowledged and applauded after the war. Most ambulance corps leaders were awarded war medals, including Gandhi. Gandhi was called Sergeant Major Mohandas Karamchand Gandhi

He must have felt very proud of his accomplishment.

But, though Gandhi did not kill anyone personally, didn’t he help an oppressor to violate the rights of other people and kill many, orphan many children, and destroy families? He never regretted this act of his. The thought of non-violence never occurred to him when he did this.

He supported the British against Boers not once but twice and participated in the atrocities the British Empire caused Boers through these two armed conflicts. He actively helped them without asking. He volunteered thousands of Indian people to volunteer with him.

Gandhi Helped the British in the First World War

When the first world war was going on, Gandhi thought that if he helped the British in the war, they would help redress India’s problems after the war. In turn, his goal was to gain something in return for his help.

Therefore, the ‘Ahimsawadi’ Gandhi decided that since he couldn’t stop the war and stop the violence, he might as well take part in the war and help his nation get freedom after he helps win her oppressor win the world war. If you are confused about his decision to support the British, you are not alone. Historians and political pundits have forever struggled to explain why the apostle of peace and non-violence had rendered support to the British Empire in this war.

Gandhi arrived in India in January of 1915 and aggressively started campaigning for the war as a recruiting officer of the British Empire. This time though, unlike the Boer war, he wasn’t recruiting non-combatants but fighters to fight alongside the British in the world war.

The question arises, what kind of a non-violent preacher would like to recruit people from his own country for an armed conflict, kill and die? This proves again that Gandhi chose non-violence when it benefited him in some way and supported violence in different circumstances when that suited him. He had a dubious character like any other politician. He certainly was not a Mahatma.

Gandhi and the British during the Second World War

The second world war was fought under new political realities, and Gandhi had also seen the betrayal by the British despite all the help he got them during the war. So, he was already annoyed with them. Plus, there were other influential leaders such as Vinayak Damodar Savarkar with a significant following and Netaji Subhas Chandra Bose with his own army and international contacts fighting for the freedom of India.

Therefore, Gandhi did not go on a recruitment drive for the British forces this time around.

But there is no mention that Gandhi decided not to support the British because of his non-violence principles. Instead, he chose not to help them because he was upset at their attitude. Had they given him the discounts he wanted after the first world war, perhaps he would have supported them again, leaving his principle of ‘Ahimsa’ on the side. Was he just a politician after all?

The true champions of ‘Ahimsa’ and the actual Mahatmas who lived these principles day-in and day-out for a lifetime, Mahatma Buddha and Mahatma Mahavir Jain hardly picture when the word ‘Ahimsa’ or ‘non-violence’ surfaces in public discourse and mainstream media. But Gandhi and ‘Gandiwaad’ indeed features!

Can you imagine Bhagavan Buddha or Mahavir even remotely agreeing with Gandhi’s actions? Gandhi talked ‘Ahimsa’, but what he did through his words and actions from time to time throughout his lifetime are nothing less than ‘Himsa’ or violence. He violated people’s dignity, democratic norms of the Congress party, people’s private lives and glorified murderers and rioters more than once.