Gandhi – The Cunning British Agent and His Non-Violence Propaganda 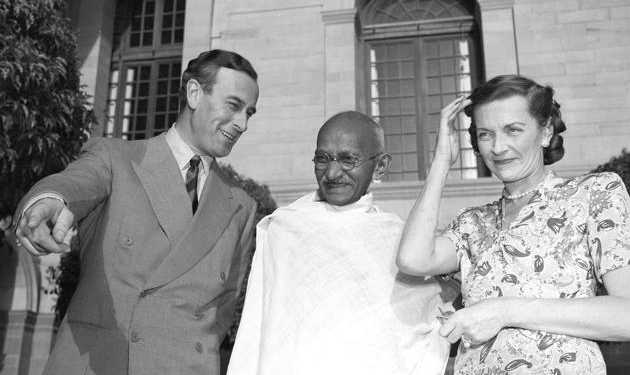 We have already published numerous examples of the hypocrisy of Gandhi concerning Satya and Ahimsa (truth and non-violence) philosophies. Gandhi’s Ahimsa was hypocrisy that was used as a tool to rescue the British empire from grave situations. In this post, we will analyze evidence from historical accounts to prove this point.

But before doing that, let’s be clear that if somebody hurts someone even using words, according to Gandhi, that is classified as ‘Himsa’ or violence.

With that understanding, here is another example of Gandhi’s hypocrisy.

1942 – Gandhi said, “Do or Die.” Was this a call for violence? Did he purposefully keep this tagline so that it could be interpreted either way? In a general sense, it sounds like a call for violence, at least not a call for ‘Ahimsa’ from any sense of the word.

Another incident came to light proving Gandhi’s violent conduct in personal life. It so happened that, just before the Lahore Session, Gandhi came out of a meeting in Bhiwandi and found that someone stole his Chappals (sleepers). Gandhi was furious, and in front of everyone, he humiliated his wife, Kasturba Gandhi blaming her for his theft, saying that she is not good enough since she couldn’t even take care of his Chappals? This incident had made the news! Such was Gandhi’s Ahimsa, especially the verbal Ahimsa. He was quick to preach but never practiced what he taught.

Examples of Gandhi’s Role in India as a British Agent

There are many examples to prove that he was a British agent. He went out of his way to ensure Jawaharlal Nehru was selected to be the Prime Minister of Independent India instead of democratically elected Sardar Vallabhbhai Patel. Gandhi did that, among other motives, to please the British because they liked Nehru more.

But here are a few illuminating incidents to prove Gandhi as a British agent beyond doubt:

In 1922, Gandhi pulled out of the “Non-Cooperation” movement blaming the Chauri Chaura incident where people burnt a police station killing everyone in the building in retaliation to the police brutalities earlier that day when the police had fired on unarmed protestors and killed a few people.

By the time Chauri Chaura happened, the movement had already mobilized a large population pan India. It looked like a movement that would force the British to surrender. But, as soon as the news of Chauri Chaura came, Gandhi announced the end of the movement and forced the Congress party to bend and suspect the movement altogether. The excuse for his withdrawal was that the agitation had turned violent, and so he felt it was against his principles to continue this movement further. He didn’t even try to understand the reasons behind Chauri Chaura’s violence. In hindsight, it looks clear as daylight that Gandhi was looking for an excuse, and as soon as he found one, he shut down the movement immediately because it made his masters (the British) uncomfortable.

“Do or Die” Slogan of Non-Violent Gandhi

1942 – Gandhi gave the slogan, “Do or Die.” When people acted on his call, did, and died as a result of this agitation, Gandhi condemned the violence. He did not take the blame on himself but blamed the people for misunderstanding him. The idea behind this strategy was to put guilt in the minds of the people of India so that they couldn’t be sure if their leader, ‘Gandhi,’ would appreciate them for their actions or be upset…He wanted to keep that confusion as it suited him.

Another incident that shows the depth of Gandhi’s complicity in helping the British agenda is from the book, “Peasants Betrayed: Essays in India`s Colonial History” by Professor Kapil Kumar.

Prof. Kapil Kumar says that Baba Ram Chandra, a farmer leader of Awadh, wrote in his diary that he was kept captive for a week in ‘Firangi Mahal’ of Lucknow by Abdul Bari in January of 1921. Then he was brought into Allahabad in ‘Burqa’ (a full-body veil for Muslim women) on the ground that British police were looking for him, and so he must disguise himself as a woman in ‘Burqa.’

After arriving in Allahabad, he said that he was kept for one month in Anand Bhawan. There, he was not allowed to go out. After a month, he was brought to Banaras, again in ‘Burqa.’  It was the time of the inauguration of Kashi University in February of 1921. At that time, in Banaras, Baba Ram Chandra was arrested by the British police along with Gandhi. Related to this incident, there have been documented discoveries indicating that the British had chosen Banaras as the most appropriate arresting place for Baba Ram Chandra because Gandhi would effectively contain any violence if it erupted in protest to Baba Ram Chandra’s arrest. The reason for this thinking was that Baba Ram Chandra was a leader for whom more than 50,000 farmers had gathered and surrounded the Pratapgarh jail when the same British police had him arrested in 1920, forcing the government to release him within hours of the arrest.

Another example of the duplicity of Gandhi is exposed through the Jallianwala Bagh massacre by General Dyer. That incident had been criticized from all over the world. Everybody condemned the incident, and the British government was also on the backfoot. But, Gandhi had no ill feelings about General Dyer. He is quoted writing letters and speeches forgiving that brutal General again and again without any authority. Mohandas Karamchand Gandhi also protected General Dyer going the extra mile and not letting Congress push for Dyer’s prosecution. In 1938, in an interview, he said this:

Who could be more cruel or blood-thirsty than the late Gen. Dyer? Yet the Jallianwala Bagh Congress Inquiry Committee, on my advice, had refused to ask for his prosecution. I had no trace of ill will against him in my heart. I would have also liked to meet him personally and reach his heart, but that was to remain a mere aspiration. (CWMG Volume 68, P83, ‘Talk to Khudai Khidmatgars’, 1 November 1938)

But the same Gandhi was not very forgiving to Sardar Udham Singh, who worked hard for years and finally eliminated Michael Dwyer to avenge the Jallianwala Bagh massacre, 21 years later in 1940.

Gandhi was quick to react and condemn Sardar Udham Singh as soon as the news hit the stands:

The outrage has caused me deep pain. I regard it as an act of insanity…I hope this will not be allowed to affect political judgment.

Gandhi’s Silence on the Death of Jatin Das

Because Gandhi had no respect for Indian freedom fighters, be it Bose, Bhagat Singh, Savarkar, or anyone else. He only cared about himself and always thought of how he could help his masters (the British) in achieving their goals. Another incident that shows his character is the death of Jatin Das.

Since people have almost forgotten Jatin Das, let’s introduce him a bit first. So, Jatindra Nath Das, better known as Jatin Das, was an Indian freedom fighter and revolutionary during the same time as Gandhi. He was a member of the Hindustan Socialist Republican Association, followed Gandhi’s non-violence technique of protest, and died in the Lahore jail after a 63-day long hunger strike. His death created a massive uproar in Kolkata. Subhas Bose personally took part in processions with Jatin Das’s dead body.

But, Gandhi never made a statement on his death. When he was asked, he refused to comment, saying that it’s better that he avoids commenting. Why did Gandhi do that? Jatin Das gave his life for the nation following Gandhi’s tool of Satyagraha. But Gandhi didn’t utter a word about Jatin’s sacrifice? We don’t know the answer to that question. But, based on what we know about Gandhi’s character, it appears that Gandhi knew that Jatin’s sacrifice had worked against his masters (the British). So he didn’t want to glorify Jatin, and he knew that if he spoke ill of Jatin, it would erase people’s goodwill for him. So, he stayed silent and let it pass…

If we look at all these incidents and many more, it’s straightforward to see through Gandhi’s duplicity and complicity in destroying India’s strength, breaking India’s will, and making Indian people weak mentally. There doesn’t seem to be a reason to doubt that Gandhi was indeed a planted agent of the British who was used time and again by them to rescue them in difficult situations. Gandhi’s Ahimsa was a weapon that Gandhi used to unarm Indian people so that the British could continue to loot India for as long as they could.

Gandhi’s Curious Silence on Himsa (Violence) by the British and Muslims, Always

Gandhi was quick to condemn Sardar Udham Singh, Bhagat Singh, Subhas Bose, Chhatrapati Sivaji, and he didn’t even spare Bhagavan Rama and Krishna. But there is no evidence available that Gandhi ever condemned the British who had continued to massacre Indian people right from the early 18th century through 1947, looted Indian wealth uncontrollably, forced Indians into wars that had nothing to do with India at all, and committed all kinds of unspeakable crimes against Indian people. Gandhi never said a word to condemn the brutalities of the British. Gandhi also never found the courage to denounce any act of violence from the Muslims.

Gandhi never condemned the Moplah Hindu massacre either. On the contrary, he called those Muslim barbarians brave and God-fearing patriots. Gandhi never condemned the Noakhali Hindu massacres where a series of semi-organized massacres, rapes, and abductions, combined with looting and arson of Hindu properties, were perpetrated by the Muslim community in the districts of Noakhali in the Chittagong Division of Bengal in October–November 1946

It is reported that eventually, Gandhi had remarked that Hindus must quit Noakhali or face death. The New York Times ran a headline, “Quit Noakhali or Die, Gandhi Warns Hindus.”

All these examples and analyses of Gandhi’s conduct firmly establish Gandhi as a British agent who was planted to help the British and weaken the Indian freedom struggle. British had already seen the ability of the Indian people in the first war of independence in 1857, and they did not want to face a similar or worse uprising in India. People like Talk, Savarkar, and organizations like Abhinav Bharat had already begun to worry the Empire. So, they launched Gandhi as they found him to be the most suitable person to fool Indians. He was dressed like a Saint with the clear mission to disarm Indians, weaken Indian spirit and infuse a sense of apathy in Hindu society, which had still not weakened enough even after 1000+ years of foreign rule.

Member Parliament Ellen Wilkinson, in 1932 after she visited India, said this aptly:

‘Gandhi was the best policeman the Britishers had in India’

When we review Gandhi’s contributions to India, we find that the amount of damage to the Indic civilization that Gandhi caused was enormous. The cult called Gandhiwaad continues to damage India even today in the 21st century. Indians need to wake up to this reality and must eliminate the evil of “Gandhiwaad” from our discourse. Gandhiwaad and Gandhi have been the biggest hurdle for India’s progress in the last 100 years. Wake up, India!