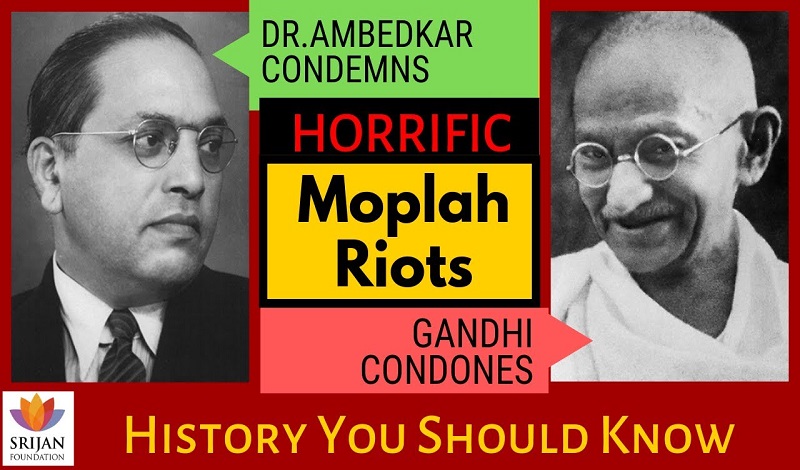 The aim of the Khilafat movement was to establish the kingdom of Islam by overthrowing the British government. Gandhi had supported this movement and encouraged all Hindus to participate in this movement. Gandhi asked Hindus to help ‘brother Muslims’ in the Khilafat movement and Hindus did. But that movement of Gandhi claimed more than 8000 Hindu lives and the destruction of Hindu society anyway. Gandhi still praised Moplahs for their bravery and put the blame squarely on Hindus of Malabar.

Dr. Ambedkar hated Gandhi’s stand and spoke firmly against Gandhi and wrote. In this video (shared below), Speaker Anand Ranganathan explains how Mahatma Gandhi condoned the horrific, barbarian acts on Hindus by Muslims during Moplah Riots which incensed Dr. Ambedkar. Dr. Ambedkar was adept at understanding the mindset of political Islam and he rightly evaluated the Malabar Rebellion, popularly known as Moplah Rebellion, as an outbreak to establish the Kingdom of Islam in Malabar by overthrowing the British Government and non-believer Hindus.

Dr. Ambedkar was baffled by the attitude and treatment accorded to the Hindus in Malabar, irrespective of their social status, by the Moplah rebels during the course of their action against the British authority A distillate of Ambedkar’s thoughts on Islam and Muslims can be found in Pakistan Or The Partition Of India, a collection of his writings and speeches, first published in 1940, with subsequent editions in 1945 and 1946

Please watch the entire video to learn Dr. Ambedkar’s thought about Mahatma Gandhi and why he thought that calling Gandhi a Mahatma was unjustified. In fact, Dr. Ambedkar never respected Gandhi and never accepted him as ‘Mahatma’. He also called Gandhi a corrupt politician.

Please watch this fantastic talk by Anand Ranganathan and share with your friends and family. We are on a mission to awaken India to the dark character of Gandhi and to demolish the cult of ‘Gandhiwaad’. Please help spread the truth!