Gandhi – A Racist, Hypocrite and Anti-Indian ‘Mahatma’ Who Hated Kaffirs 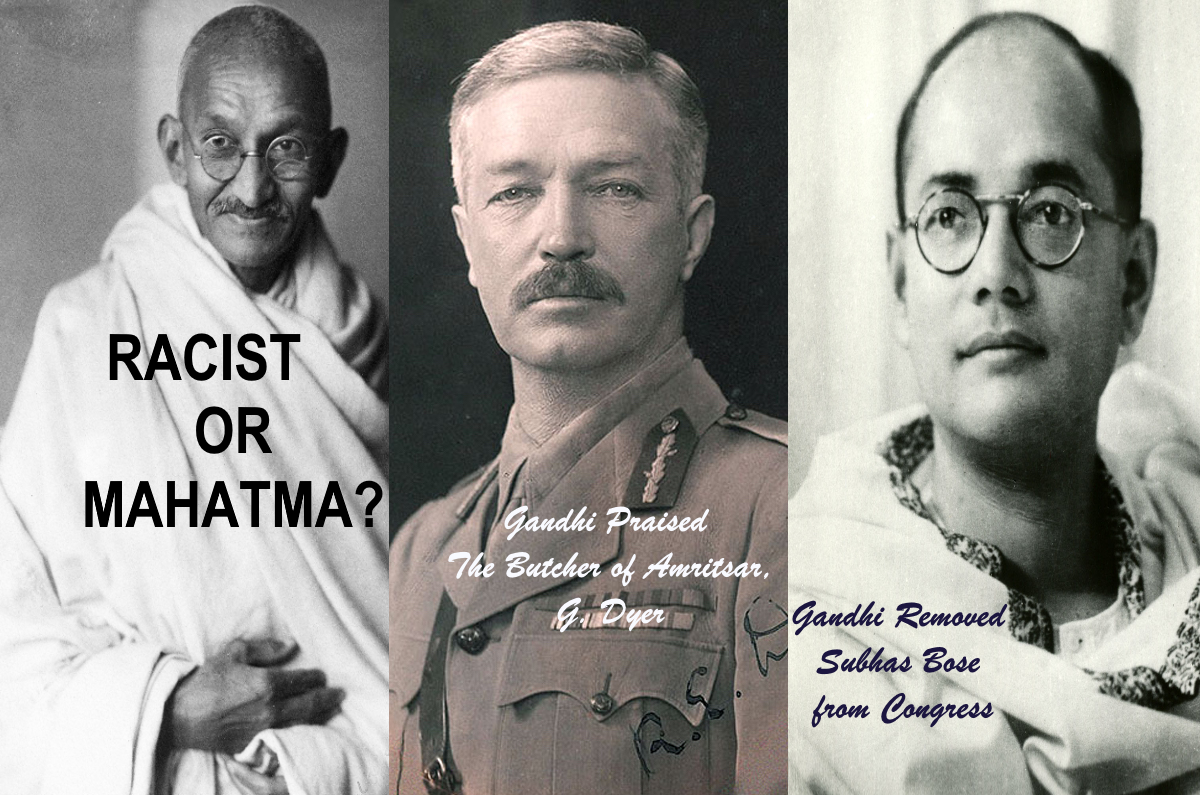 When asked about the hypocrisy of the likes of Gandhi, a wise person once said this:

One thing that I think is almost universal for these famous advocates of selflessness and altruism is that they are hypocrites. They have to be. Because if they were to live fully up to their standard – the idea that being moral consists in self-sacrificially serving others – they would have to die. So, baked into their moral code is the necessity of hypocrisy. And hypocrisy eats away at one’s soul. When you know you are not living up to the standards you profess, you feel rotten. That destroys your self-esteem. And, to prop up your self-esteem, at least visually for others, you double down on calls for sacrifice, and your hypocrisy becomes more acute. It’s a vicious cycle.

There cannot be a more accurate explanation of Gandhi’s hypocrisy and dictatorial attitude combined with his immoral actions throughout his life.

A web of narratives has been spun around Mohandas Gandhi’s personality for decades to display a notion of false aura and bring forth to the public an impression of him which exuded compassion, inclusivity, love, affection, tolerance, and all godly virtues. But, the more we study the so-called Mahatma’s life, the more we realize how malicious the campaign to paint him as a saint has been.

Today, we discuss the man Mohandas was. Today we discuss if he was actually a crusader for the rights of the oppressed in South Africa or he himself practiced closeted racism. Today, we analyze what beliefs Gandhi had regarding the nation’s interests?

Ours is one continual struggle against a degradation sought to be inflicted upon us by the Europeans, who desire to degrade us to the level of the raw Kaffir  whose occupation is hunting, and whose sole ambition is to collect a certain number of cattle to buy a wife with and, then, pass his life in indolence and nakedness.

By the way, if you don’t know, Kaffir is a slur now classified as hate speech and generally considered to be the equivalent of “nigger” in the United States.

The same ‘Mahatma’ Gandhi wrote in Indian Opinion in 1908 during one of his campaigns for the rights of Indians settled there:

We could understand not being classed with whites, but to be placed on the same level as the Natives seemed too much to put up with. Kaffirs are, as a rule, uncivilized—the convicts even more so. They are troublesome, very dirty, and live like animals.

In his book, ‘Gandhi: The Man, His People, and the Empire,” Gandhi’s biographer and grandson Rajmohan Gandhi writes that on one such occasion, Gandhi had written about his experience of sharing the cell with black people like this:

Many of the native prisoners are only one degree removed from the animal and often created rows and fought among themselves.

Gandhi’s actions came across as full of paradoxes. At one end, he tried to build and maintain an image of a peace-loving, generous, and equalitarian being. But in reality, he exuded warmth and appreciation for fascist dictators like Mussolini. In his book, ‘Subhash Chandra Bose in Nazi Germany’ published in 2011, Romain Hayes explains that after Gandhi met Mussolini in 1931, he was so impressed by the man that Gandhi went ahead and praised Mussolini with some great words. He described Mussolini as “one of the great statesmen of our time.”

Post that, he wrote the following in a letter to his friend about Mussolini:

Many of his reforms attract me. He seems to have done much for the peasant class. I admit an iron hand is there. But as violence is the basis of Western society, Mussolini’s reforms deserve an impartial study.

For someone who was appreciative of divisive, fascists, and violent dictators, isn’t it surprising that he was made the poster boy of non-violence and never allowed Indian people to pick up arms against Britishers in India? This is for you, the reader, to think and decide his motives…

In a startling revelation, in the aftermath of the Jallianwala Bagh massacre by General Dyer, Gandhi had no ill feelings about General Dyer. He is quoted writing letters and speeches forgiving that brutal General again and again at different times.

Gandhi also protected General Dyer by going the extra mile and not letting Congress push for Dyer’s prosecution for this crime. In 1938, in an interview, he said this:

Who could be more cruel or blood-thirsty than the late Gen. Dyer? Yet the Jallianwala Bagh Congress Inquiry Committee, on my advice, had refused to ask for his prosecution. I had no trace of ill will against him in my heart. I would have also liked to meet him personally and reach his heart, but that was to remain a mere aspiration.

Twenty-one years after the Jallianwala Bagh massacre, when Uddham Singh avenged the incident by putting down Michael O’Dwyer, Gandhi labeled it as an act of insanity. This is what he said:

The news of the death of Sir Michael Francis O’Dwyer and of the injuries to Lord Zetland, Lord Lamington, and Sir Louis Bane has caused me deep pain. I offer my condolences to the deceased’s family and hope that the injured will soon recover. I regard this act as one of insanity. Such acts have been proved to be injurious to the causes for which they are committed. I hope this will not be allowed to affect political judgment.  (Found in the 78th volume of the “Collective Works of Mahatma Gandhi”)

These excerpts provide much-needed clarity regarding his thoughts on national interests and about India’s nationalists and freedom fighters. Gandhi’s life is filled with similar conduct, just like this. One can easily read this in relation to Bhagat Singh’s hanging or Gandhi’s reactions to the murder of Swami Shraddhanand, and so on. The more we study, the more we find.

‘Mahatma’ Gandhi’s Allegiance to The British – His Anti-Indian Conduct

Insights on his thoughts on securing Indian interests and India’s borders can always be easily seen from his publicly shared thoughts and expressions. His love and compassion for his colonial masters can be interpreted from his statements and the actions he took throughout his life in India.

Gandhi thought that soldiers should become farmers and that India was best served if its army was non-violent. Here are his exact words:

Our army will lead the world if it adopts non-violence instead of violence.

But the same ‘Mahatma’ had no hesitation when it came to serving his colonial masters in the wars where they needed Indian support. For instance, he appealed to Indian people for the enlistment in World War 1 for the British like this:

As long as we have to look to Englishmen for our defence, as long as we are not free from the fear of the military, so long we cannot be regarded as equal partners with Englishmen. It behooves us, therefore, to learn the use of arms and to acquire the ability to defend ourselves. If we want to learn the use of arms with the greatest possible dispatch, it is our duty to enlist ourselves in the army.

So, as you can see through his hypocrisy, he wanted India to be a nation of farmers without any army. But when it came to fighting for Britishers, he wanted the farmers to take to arms and fight alongside the British and kill people of other nations who had no conflict with India directly. This type of repeated contradiction in his conduct should make every Indian think his interests were aligned with India or Britain….

When Netaji Subhas Bose was chosen as the president of Congress against Gandhi’s wishes, the then Viceroy, with the help of Kriplani, sent a file to Gandhi mentioning how Bose is readying a force of volunteers against Britishers and that’s why Bose shouldn’t be elected as the president of the Congress.

Gandhi acted swiftly and put his aid Pattabhi Sitaramayya as his candidate opposite Subhash Chandra Bose in the Congress Presidential elections in 1939. It is pertinent to note that Gandhi suffered a humiliating defeat at the hands of Subhash Chandra Bose and Sitaramayya lost in that election. Although Bose became the president, Gandhi, due to his covert agenda of serving his masters (the British,) made sure that Bose couldn’t function as the Congress President. Circumstances were manufactured by Gandhi, forcing Bose to resign, and post his resignation, Bose was arrested by the British. It’s another topic of Bose’s creativity that he managed to escape.

The conflict between Subhas Bose and Gandhi has been portrayed as if Gandhi opposed Subhas Bose because Bose was for armed revolution while Gandhi remained a non-violence proponent. But Gandhi’s opposition to Bose seems to be emanating from directions from his colonial masters because they saw Subhas Bose as a threat to them and wanted him gone. Gandhi just assisted them and didn’t rest until Subhas Chandra Bose was not removed from his post and arrested by the British.

This attitude of Gandhi in an attempt to covertly help his colonial-masters (the British) can also be proven another incident in which he assisted the British in arresting Baba Ram Chandra in 1921.

If you like this article, please share this with your friends and family and help the world see that Gandhi was not a Mahatma. If anything, he was a Duratma and a fraud. The world needs to be rid of the cult of Gandhiwad, and especially Indian people need to know the real character of Gandhi and the damage Gandhiwad has done to the Indian conscience.