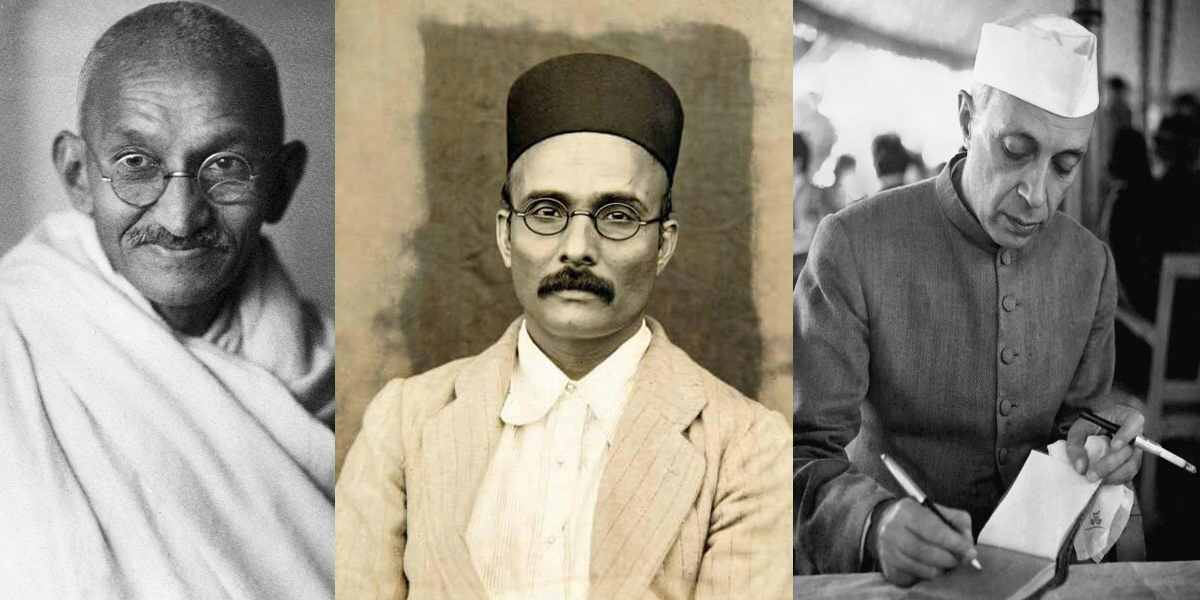 Sometimes, irrational barbs are hurled at Veer Savarkar trying to minimize his stature, or in an attempt to belittle him or his sufferings in the Cellular Jail. The Congresses party workers and so-called ‘intellectuals’ who subscribe to the Nehru-Gandhian way of thinking, try to falsely accuse Veer Savarkar of sending letters of apologies to the British for pardon. However, they start looking sideways when we begin to ask them how Jawaharlal got pardoned after his 12 days of arrest in Nabha, Punjab.

Let’s discuss Nabha and then compare that with the sufferings of the Savarkar brothers for a contrast.

Pandit Jawaharlal Nehru was arrested on 22nd September 1923 in Nabha (near Punjab) when he participated in agitation there. This incident is a historical fact, but nowhere in the history textbooks or media seems to talk about it. In this post, you will know why.

The jail in Nabha was an old jail that didn’t have the facilities that Nehru was used to enjoying in the prisons of Allahabad and other jails where he was put into in his previous arrests. Nehru was very pained due to the discomfort he faced in this Jail.

After Jawaharlal Nehru remained in that Jail for 3 or 4 days, as described in the book, Handcuffed with Jawaharlal, Motilal Nehru directly contacted the British Viceroy apparently, the jail staff behavior changed dramatically almost overnight. They were being supplied fresh water for showers, fresh clothes, and even tasty outside food and fruits were arranged for Jawaharlal and his inmates to enjoy while he was like a guest in that jail.

For more proof, Nehru writes in his autobiography that his father had contacted the Viceroy when he was jailed in Nabha as he was worried about his son’s condition.

Not just that, B.R. Nanda writes in his book, “The Nehrus”, that Motilal Nehru pleaded repeatedly and finally convinced the Viceroy that he wanted to be allowed to go to Nabha. He promised that he would only meet his son there and come back without participating in any agitation. Motilal Nehru gave this in writing!

The point to note here is that Motilal Nehru had already been president of Congress by the time this incident occurred. Therefore, ethically speaking, it was inappropriate for a prior Congress president to have a blind eye on protests and agitations going on in the city when he was there to see his son in the Jail. The latter was arrested due to the same agitation.

As the story moves forward, we should know that the judgment, in this case, was announced on the 12th day of the arrest. The shocking fact of this case is that Jawaharlal Nehru, along with two of his co-accused, AT Gidwani and K Santanam, was sentenced to 2 years of imprisonment by the court at about 2:45 PM. But miraculously, Jawaharlal Nehru was given a pardon within 4-5 hours of the judgment, and he alone was a free man by 6 PM that day.

This type of grace and pardon by the British was only offered to Jawaharlal Nehru in the history of British India. It’s anyone’s guess now as to why the left, liberal media and the Congress-backed law experts never discuss the Nabha case of Nehru.

The terror of Nabha jail had a lasting impression on Nehru’s mind just with his 12 days of encounter even though his father’s pleading got him luxurious treatment in prison and got him pardoned after the sentencing. Nehru’s fear of that experience in Nabha is evident from his autobiography, in which he writes that another agitation in Nabha erupted again a year later. But Nehru didn’t dare to go there. AT Gidwani went there again, got wounded, got arrested, and suffered to the level that he almost died. But, Nehru didn’t have the courage even to go to see him in Nabha. He wrote that he regretted that decision of his in his autobiography.

All to say that 12 days of stay in Nabha jail that was nothing compared to the sufferings of Veer Savarkar in the Cellular Jail of Port Blair shook Nehru and his father to his core. Did Jawaharlal Nehru not sign a bond and agreed to the British conditions for that pardon? Did not even his father, Motilal Nehru also use his influence and beg on his behalf in front of the British to save his son? Can someone explain?

Here is a link providing a bit more detail about Nabha incident: How Motilal Nehru pulled a few strings and Jawaharlal Nehru signed a bond to get out of Nabha jail in just two weeks of ‘harsh conditions’

‘Mahatma’ Gandhi had a little bit more of an experience than Nehru in terms of jail journeys for sure. But the treatment he received in the British prisons seems to be also very luxurious. For example, when Gandhi was jailed and a few other Congress leaders in 1942, he was kept in Aga Khan Palace in Pune. Gandhi was provided a separate room, a cook, and all kinds of luxury. Gandhi is known to be such a prisoner (the more you read, the more you know) who was allowed to live with his wife, his secretary, and even his participants of ‘Brahmacharya Prayog’ in the jail. He was treated not any less than a royal guest!

Gandhi wrote his ‘Experiments in Truth’ in jail. Nehru wrote his ‘Discovery of India’ while in prison as well. This explains the kind of liberty they were provided during their jail time.

Veer Savarkar and Babarao Savarkar – Brothers in the Cellular Jail

Now, let’s contrast that with the sufferings of Veer Savarkar, who was jailed for 50 years in the cellular jail with no hope of ever coming out alive. Veer Savarkar and his elder brother, Babarao Savarkar, were kept in the same prison, albeit in different cells. The jailer knew that they were brothers arrested at different times for different allegations. Still, the Savarkar brothers were not allowed even to meet face to face for the entire first year of his jail term. 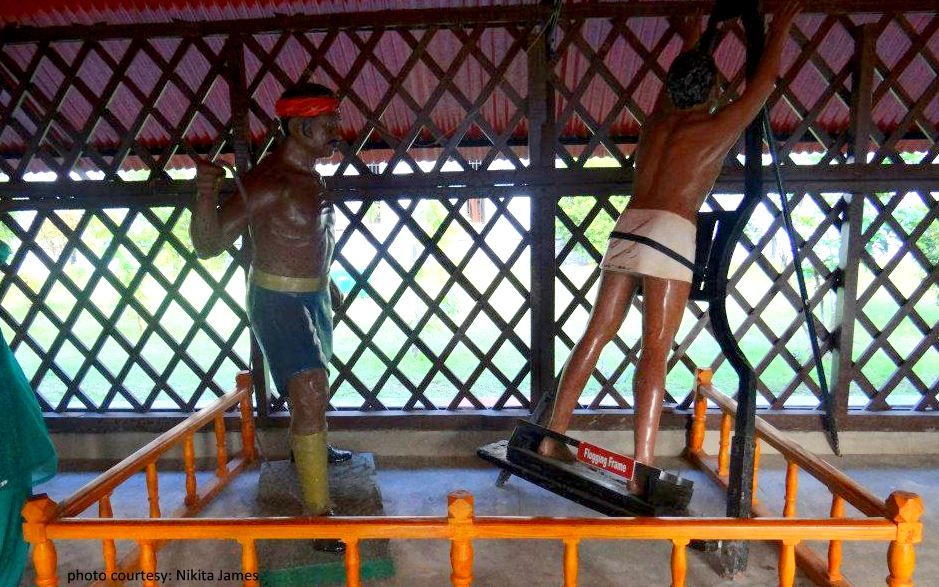 Veer Savarkar suffered an inhuman ordeal where prisoners were given to drink just one or two glasses of water while working long hours on Kolhu every day. In the name of food, 2-3 grams of poorly boiled and dirty rice was given to eat and sometimes, even not that. For days, and when the jailor would get mad, Savarkar would be chained to a pole in standing position for weeks, without any relief, not even for nature’s call. Veer Savarkar suffered, faced all those atrocities continuously for over 21 years, and came out alive in the end to serve the motherland again. Even after all that suffering, Savarkar continued to fight for India’s freedom in every way he could and opposed Gandhi’s wrong and unjust policies and actions. Probably that is why the ‘Gandhiwadi’ gang still spreads hate about Savarkar through false propaganda?

A couple of references on the sufferings of Savarkar in Cellular Jail are given here. Please check them out to see the chilling details:

Watch this video that shows the actual jail cell of Savarkar and narrates the ordeals and also shows them as he talks:

While Nehru and Gandhi enjoyed all the luxury of life in the jail and wrote books, Veer Savarkar was forbidden from reading anything, let alone writing anything at all. But he was a fighter and was blessed with a sharp memory. Even in that situation, he would compose poems and write them on the walls of the cellular jail with the nails of his hand and commit them to his memory.

Is there even any logical value in comparing the sufferings of Veer Savarkar with the jail tourism of Gandhi and Nehru? The tragedy of India is that, even after 75 years of India’s independence, Veer Savarkar doesn’t get the respect he deserved while Gandhi and Nehru continue to dominate the minds of our politicians. However, they hardly deserve that respect, that recognition.

Indians need to read the history of Savarkar, Nehru, and Gandhi, research their lives, and decide who among these three deserves their respect. And then India will be free from the clutches of a fake Baapu, a fake Chacha, and she will recognize her great son who sacrificed everything for her freedom, Veer Savarkar!