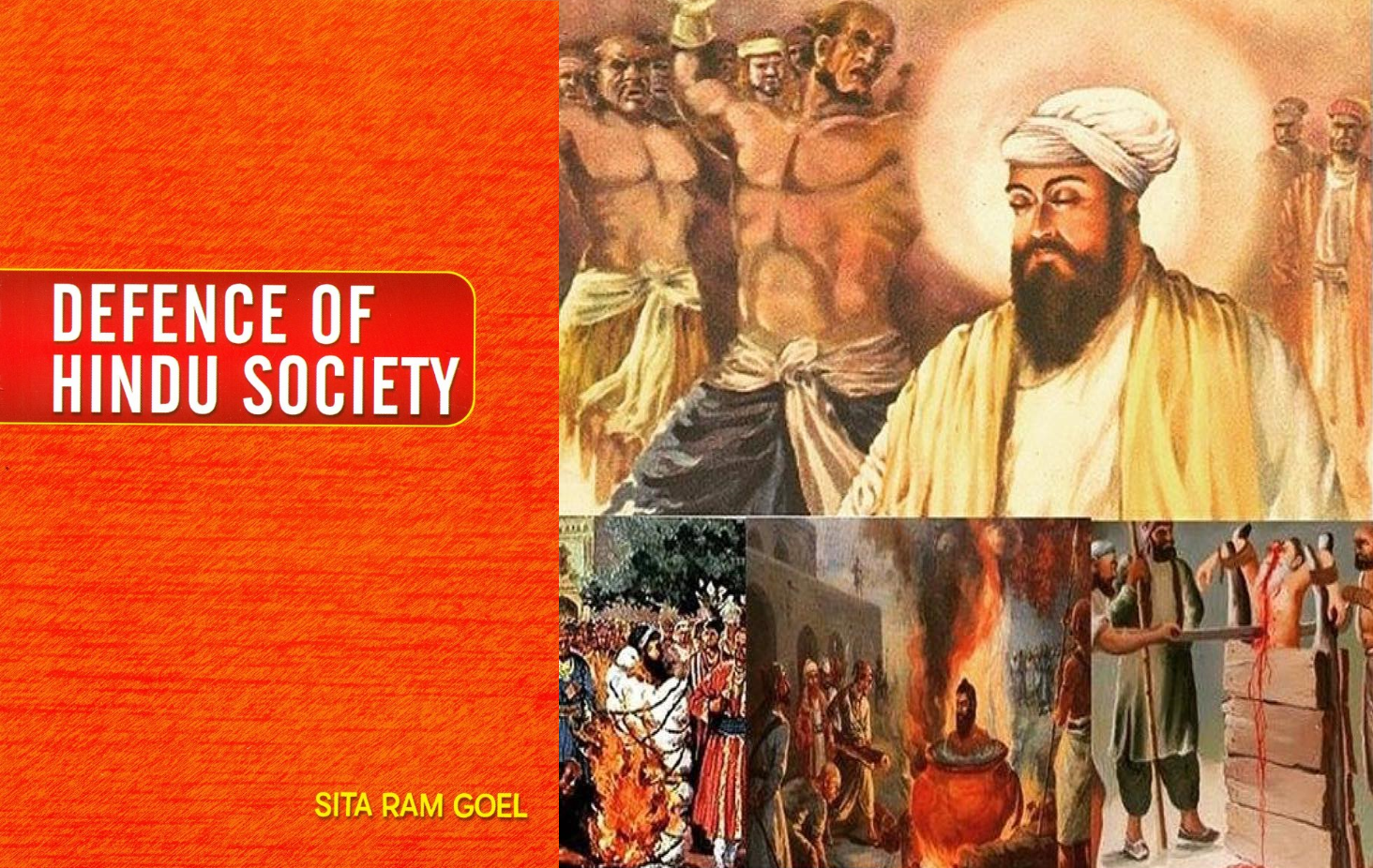 The book “DEFENCE OF HINDU SOCIETY” by Sita Ram Goyal should be read by every Indian and Hindu who is confused about the Hindu religion, love our culture, or even wonders about the Indian civilization and the conflicts and fault lines among Hindutva, Islam, and Christianity. He wrote this in 1983, yet the content is so relevant that every word he wrote feels like it was written for today’s atmosphere.

This book is in continuation of Sita Ram Goyal’s earlier book “Hindu Society Under Siege,” wherein he explains how residues of Islamism, Christianism, Macaulayism, and Communism have held Hindu Society under siege.

In this book, though, the author has provided tools for the defense of Hindu society. As he rightly points out, as the first principle of defense, Hindu society needs to stop processing and evaluating its own heritage in terms of ideas and ideals projected by closed creeds and pretentious ideologies. These residues selectively pick up a sentence from our scripture and start advocating monotheism in Hindu Scriptures.

Since many Hindus have not read their own scriptures, many of these fools join the chorus of monotheism in their attempt to look ‘secular’ and ‘modern.’  So, Hindus need to study our glorious history, our scriptures to refute these offenders outrightly.

It’s a fantastic read for anyone, even for Muslims and Christians who have the courage to face the truth and investigate their own history to trace their own ancestors who were eclipsed by the rise of monotheistic cults of Islam and Christianity.

I do not want to quote the lines from the book where he talks about the misinformation about monotheistic creeds and Gandhi:

Hindu society has never had an organized hierarchy like the Christian Church. Nor has Hindu society ever been a fanatical fraternity like the Muslim Ummah. Hindu spirituality, therefore, never became an instrument of predatory imperialism. Hindu princes in pre-Islamic Bharat fought many wars. But none of them was a religious war.

The scene changed to a certain extent when Hindu society was attacked by an imperialist ideology named Islam which pretended to be a superior religion and which swore that Allah and his last prophet had mandated the whole earth to the Muslim Ummah. Hindu sword had to be drawn in defence of Hindu society and culture, and some Hindu saints blessed the enterprise.

Even so, Hindu saints of the stature of Kabir and Nanak kept on pleading with the Mullahs and the Sufis to give up their exclusiveness and accept the Hindu spiritual insight that all paths lead to the same goal. Hindu Dharma thus retained its spiritual character and universality all along.

Kabir and Nanak and numerous other nirguNa saints failed to carry any conviction with the mullahs and the sufis and the sultans. The latter were either too self-righteous or too enamoured of the power and pelf which the exclusiveness of Islam had earned for them. Kabir had to suffer persecution from Sikandar Lodi for questioning this exclusiveness. Guru Arjun Deva and Guru Tegh Bahadur had to lay down their lives in defence of Sanãtana Dharma.

In the final round, however, the nirguNa saints succeeded only in confusing Hindu society into believing that Islam was just another religion and not an ideology of imperialism. Fortunately, the impact of nirguNa saints on Hindu society was marginal. The nirguNa saints have been revived in more recent times, and presented as social reformers who stood for a casteless and classless society and as the precursors of what passes for Secularism in present-day Bharat. This monstrous misrepresentation has been mostly the work of Hindi scholars working for doctoral degrees. They have succeeded to a large extent in misleading the Hindu intelligentsia.

About ‘Mahatma’ Gandhi and ‘Sarv-Dharma-Samabhava’ Prayog

Sita Ram Goel now explains Gandhi’s contribution in diluting Hindu society’s strength by bringing Islam and Christianity at the same level of respect as the Hindu religion. He says:

The confusion has, by now, become very widespread and is symbolized by the sanctimonious slogan of sarva-dharma-samabhãva. This slogan was coined by Mahatma Gandhi and included in his MaNgala Prabhãta as one of the sixteen mahãvratas. The result was unprecedented appeasement of Islam, starting with the Mahatma’s support of the Khilafat movement.

The Mahatma had believed sincerely that he could touch the heart of Islam and win over the Muslims to nationalism by paying handsome tributes to the Quran and the Prophet. But he also ended as a colossal failure like Kabir and Nanak. In the final upshot, he had to pay the price with his own life, and the nation had to suffer partition of the motherland.

For, Islam has no heart which can be touched. The heart has been drained of all human feelings and hardened into a calculating machine that manufactures only imperialist ambitions. Hindu society will never be able to soften that heart or make that machine produce anything except contrived grievances and repeated rounds of violence.

Let Hindu society make no mistake. The same is true of Christianity, though it has been forced to soften its face and language due to its collapse in the modern West. The heart of Christianity, too, has been hardened into a calculating machine.

While Sita Ram Goel also puts Kabir and Guru Nanak in the same category as ‘Mahatma’ Gandhi, who believed that Islam has a heart that can be touched and therefore, each of these people tried their best to bring harmony.

But what separates Gandhi from Kabir and Nanak is that Gandhi was a politician who, just like Mohammad of Islam, was not just preaching but had an army of followers capable of fighting/resisting/influencing government decisions. Gandhi can be compared to Mohammad more than he can be compared to Guru Nanak or Kabir Das in terms of influence and conduct. Gandhi had the ability to start mass movements, violent riots (which he caused through his actions throughout his life), and bend governments at his will.

Gandhi started the Khilafat movement that cost more than eight thousand Hindu lives in the hands of Muslim fanatics. From there, Gandhi’s attempt to appease Muslims neither stopped until his death nor did he ever get them to be pleased with him for the exact same reason as Sita Ram Goyal stated in the book: you can’t touch what doesn’t exist.

Gandhi wanted to touch the heart of Islam at the cost of Hindu society’s peril without realizing that Islam didn’t even have a heart, ever!

Such fool was our beloved ‘Mahatma,’ the father of Pakistan who was imposed on India as the father of the nation forcibly and systematically by the Nehru government and the successive governments that followed.