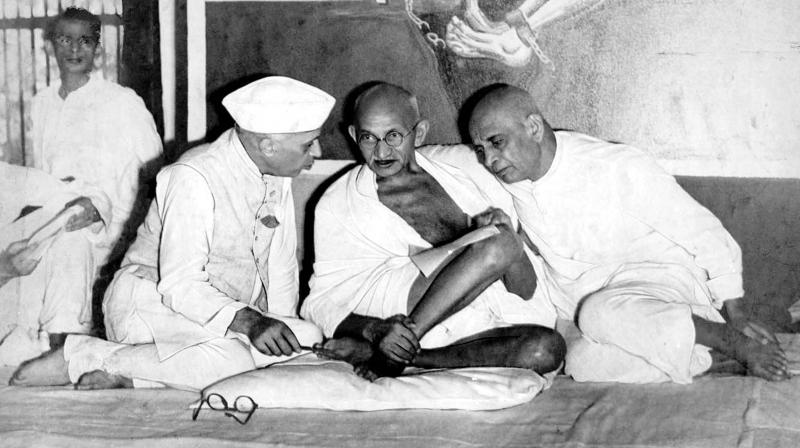 The knowledge is in the public domain that Pandit Jawaharlal Nehru was NOT unanimously elected but selected by ‘Mahatma’ Gandhi in his dictatorial move as the first Prime Minister of India. In fact, he was not the darling of the country as the fake news Congress party, true to its character, has peddled for many decades.

But, as the WW-II war was coming to an end, it was becoming clear that India’s freedom was in sight and that the Congress president would be the first Prime Minister of the interim government at the Centre.

Once the election for the post of Congress president was announced, Maulana Azad expressed his desire for re-election. Congress Working Committee also proposed Sardar Patel as a strong candidate for the position.

As Maulana Azad writes in his autobiography that nobody proposed the name of Jawaharlal until 20 April 1946 when Gandhi wrote a blistering letter to him asking to withdraw as ‘Mahatma’ was in favor of Nehru. As per Gandhiji’s wish, Azad withdrew his nomination the next day and announced that he was not in the race.

Despite Gandhiji’s open support for Jawaharlal Nehru, the Congress party overwhelmingly wanted Sardar Vallabhbhai Patel as the president and consequently the first Prime Minister of India because Patel was considered “a great executive, organizer, and leader” with his feet firmly on the ground.

Then came the day of the election on April 29, 1946, when the Pradesh Congress Committees could nominate and elect the Congress president who would be the first Prime Minister of India. A perusal of the Congress party documents shows Gandhiji’s open support for Jawaharlal Nehru; 12 out of 15 Pradesh Congress Committee’s members nominated Sardar Patel. The remaining three abstained from the nomination process.

Thus, Jawaharlal Nehru got not even a single vote in his favor in that Pradesh Congress Committee meeting which was the only legitimate body to nominate and elect the President. Patel was an undisputed winner until ‘Mahatma’ Gandhi decided to intervene, who was not even a committee member.

After this, Gandhi, the ‘Chatur Baniya’ began the efforts to persuade Sardar Patel to withdraw in favor of Jawaharlal Nehru. Finally, a strategic Gandhi, seemingly trying to stay neutral and yet influence the decision, asked Nehru:

“No PCC has put forward your name…only [a few members of] the working committee has.”

…and looked at him. Jawaharlal replied to this remark of Gandhiji with his “complete silence”.

Then, Gandhiji asked Patel to withdraw his nomination and Patel, true to his nature, like an obedient servant, complied.

Dr. Rajendra Prasad lamented and said, “Gandhiji had once again sacrificed his trusted lieutenant for the sake of the ‘glamorous Nehru’” Dr. Prasad further feared that “Nehru would follow the British ways”.

When Rajendra Prasad was using the phrase “once again”, he was referring to the denial of Congress presidentship to Patel in 1929, 1937, and then in 1946 in preference to Nehru.

Patel accepted to take the second position because of two reasons: firstly, for Patel, post or position was immaterial; and secondly, Nehru was keen that “either he would take the number one spot in the government or stay out. Vallabhbhai also reckoned that whereas office was likely to moderate Nehru, rejection would drive him into opposition. Patel shrank from precipitating such an outcome, which would bitterly divide India.”

Maulana Azad, who had stated on 26 April 1946, three days before the last date of nomination, to elect Nehru as Congress president, wrote in his autobiography, published posthumously in 1959:

After weighing the pros and cons, I came to the conclusion that the election of Sardar Patel would not be desirable in the existing circumstances. Taking all facts into consideration, it seemed to me that Jawaharlal should be the new President….

I acted according to my best judgment, but the way things have shaped since then has made to realise that this was perhaps the greatest blunder of my political life. …(It was a great mistake that) I did not support Sardar Patel. … He would have never committed the mistake of Jawaharlal…  I can never forgive myself when I think that if I had not committed these mistakes, perhaps the history of the last ten years would have been different.

Michael Brecher, one of the most sympathetic biographers of Nehru, writes:

In accordance with the time-honoured practice of rotating the Presidency, Patel was in line for the post. Fifteen years had elapsed since he presided over the Karachi session, whereas Nehru had presided at Lucknow and Ferozpur in 1936 and 1937. Moreover, Patel was the overwhelming choice of the Provincial Congress Committees…. Nehru’s ‘election’ was due to Gandhi’s intervention. Patel was persuaded to step down….

If Gandhi had not intervened, Patel would have been the first de facto Premier of India, in 1946-7…. The Sardar was ‘robbed of the prize’ and it rankled deeply.”

Gandhi advocated for democracy. Gandhiwadi or Gandhian people keep singing the songs of Gandhiwad and democratic norms. But, anyone who reads this narration of how Nehru, the first Prime Minister of India, was undemocratically not elected, but selected by Gandhi against the will of people, will know that the very foundation of the Congress party is built on dictatorship. The DNA of the Congress party has the dictatorship that Nehru and Gandhi infused into it right from the start.

Gandhi was not even a member of the Congress Committee. But he had the power to overrun the overwhelmingly elected decision of the committee by the force of his will. Today, when we hear barbs in TV debates and on social media like ‘Murder of Democracy’, “Save Democracy” and “Democracy is in danger” by politicians, it sounds disgusting. The very ‘father of the nation’ was such a dictator who forced his dictatorship over democracy at the very beginning of the ‘post-colonial’ journey of independent India. But his followers and fake news peddlers show him as an icon of democracy. Sad… but truth…

People of India need to know, and our younger generation needs to be educated about the fraud of ‘Mahatma’ Gandhi and the fraud that has been peddled on his name ever since.