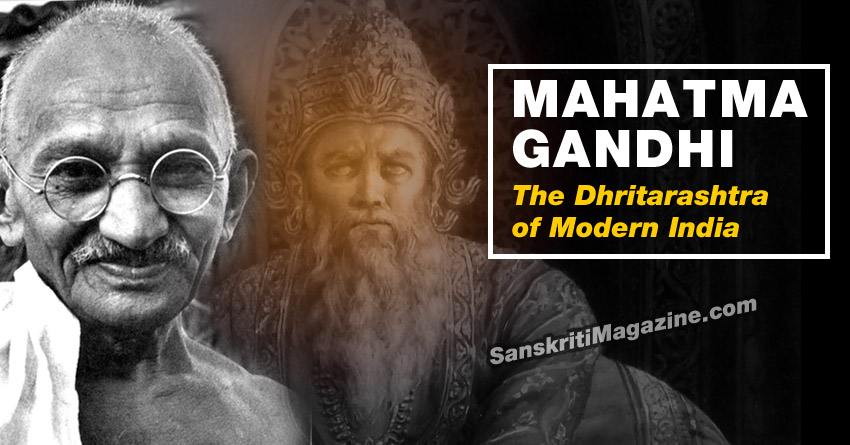 People of India have begun digging into the life of ‘Mahatma’ Gandhi through his speeches, letters, and writings of his contemporaries, and Gandhi’s character is being questioned on the measurement standards of Indian civilization. That’s undoubtedly a remarkable achievement in the 21st century, perhaps because of the digitization of information and social media despite a systematic attempt to glorify Gandhi and hide his crimes for many decades by some very powerful forces.

The author of the post, “Mahatma Gandhi: The Dhritarashtra of Modern India” has done a great job comparing our favorite ‘Mahatma’ of the modern age, Gandhi, with Maharaja Dhritarashtra in terms of hypocrisy and mental attitude quoting Sanjay’s visit to Yudhishthira Maharaj as a messenger to convince him to not go for war.

Rajesh had quoted Pandurang Shastri to summarize how Sanjay tried to dissuade Yudhishthira Maharaj and Pandavas in the presence of Shri Krishna by invoking high moral principles without context, just as our ‘Mahatma’ continuously tried to dissuade Hindus of India from retaliating when Mussalmans of India burnt Hindu houses, killed their elders and children, raped their women, and destroyed their property.

The purpose of this post is to put a bit more context and prove with examples that Gandhi was not any less than Dhritarashtra, if not worse.

The context of this conversation is that Pandavas had returned from their exile, and they wanted to get their kingdom back from Duryodhana, which the latter did not want to do. Therefore, the great war of Mahabharata looked almost inevitable. 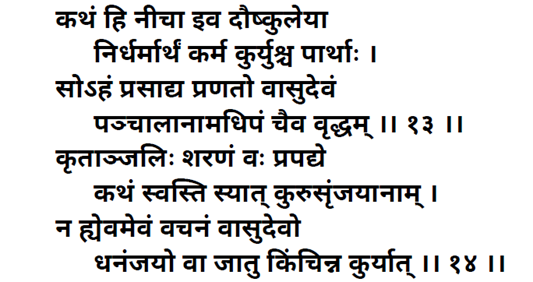 In short, through this verse, Sanjaya conveys the message of Dhritarashtra that the sons of Kunti are not so low born who will kill their kith and kin just to gain worldly wealth. He suggested and begged, albeit shamelessly, that even though Kauravas were not going to give back the property they had snatched deceitfully, it was still not a very moral thing to do for Yudhishthira and Pandavas to fight to get back what was rightfully theirs.

He doesn’t stop right here; he adds a suggestion that was appropriate for Pandavas according to him:

Here, he recommends that Yudhishthira and Pandavas choose a life of a vagabond, choose to be a beggar, and survive that way rather than use their might kill all the Kauravas on the battlefield be victorious that way. He justifies this thought process by quoting  Shastras that life is temporary and that one should always think about Dharma and rise above the temptations of getting worldly wealth etc.

If you have read some of the thoughts of Gandhiji from his “Collective Works of Gandhi” or even from the books of his contemporaries such as Dr. Ambedkar, Veer Savarkar, or Maulana Azad, these above suggestions from Sanjaya find a very close match with the thinking of ‘Mahatma’ Gandhi.

Gandhi’s Dhritarashtra Like Suggestions and Lectures to Hindus of India

In 1921, when Moplah Hindu Massacre was committed, Gandhi’s first reaction after days of silence on the matter was this:

Hindus must find out the causes of Moplah fanaticism. They will find that they are not without blame. They have hitherto not cared for the Moplah. They have either treated him as a serf or dreaded him. They have not treated him as a friend and neighbor, to be reformed and respected. It is no use now becoming angry with the Moplahs or the Muslims in general.

After saying that and praising Moplahs as God-fearing and brave patriots, Gandhi turned to Hindus and suggested this:

Even if one side is firm in doing its dharma, there will be no enmity between the two. He alone may be said to be firm in his dharma who trusts his safety to God and, untroubled by anxiety, follows the path of virtue. If Hindus apply this rule to the Moplah affair, they will not, even when they see the error of the Moplahs, accuse the Muslims.

Even so, is it more necessary for a Hindu to love the Moplah and the Muslim more when the latter is likely to injure him or has already injured him? Why should a single Hindu have run away on account of the Moplahs’ atrocities?

In a speech at a prayer meeting in New Delhi on 6th April 1947, Mahatma Gandhi gave this sermon to Hindus (mostly Hindus attended most of his prayer sessions anyway):

I only wish to tell you that you should not give up your goodness. If all the Muslims say that they wish to sever all connection with the Hindus and wish to live separately, should we, out of anger, start killing them? If we do that, we shall be engulfed in such a holocaust that we shall all be reduced to ashes, and none will survive Indiscriminate looting, and arson will only spell disaster for the whole country. Regular warfare also, I must say, causes only destruction, and nothing is gained thereby.

Then, he went on to educate us about his understanding of Mahabharata (which exposes his lack of even the basic knowledge of the epic). He said:

What has been said in the Mahabharata is of universal application. It does not apply to Hindus alone. It depicts the story of the Pandavas and the Kauravas. Though they were blood-brothers the Pandavas worshipped Rama, that is, goodness and the Kauravas followed Ravana, that is, evil. Renouncing ahimsa, they took to violence and fought among themselves with the result that not only were the Kauravas killed, but the Pandavas also were losers in spite of their victory. Very few among them survived to see the end of the war, and those who did found their lives so unbearable that they had to retire to the Himalayas.

You see, how is he downplaying the meaning of Dharma? He didn’t have any concept for standing for what was right. His idea is, right or wrong, don’t fight with Muslims. And then he says that finally Pandavas had to retire to the Himalayas and therefore the battle was not worth it. So, in essence, he justified that Lord Krishna’s incarnation was also worthless. Why so? That is because Gandhi said so! How could Gandhi be wrong? So, with this utterance, he attempted to establish himself as a higher authority than Lord Krishna, whose Gita he was promoted to other people.

Gandhi continued to talk in that prayer meeting and also added this:

Hindus should not harbor anger in their hearts against Muslims even if the latter wanted to destroy them. Even if the Muslims want to kill us all, we should face death bravely. If they established their rule after killing Hindus, we would be ushering in a new world by sacrificing our lives. None should fear death. Birth and death are inevitable for every human being. Why should we then rejoice or grieve? If we die with a smile, we shall enter into a new life, we shall be ushering in a new India.

Do you see a similarity between Gandhi’s suggestions to Hindus and Dhritarashtra’s suggestions to Yudhishthira? Both suggest the ‘good’ side to avoid fighting at all costs. Both recommend running away, giving up and surrendering everything to their evil opposition just so that the wrong side can have what it wanted and because the evil won’t compromise.

Results – Dhritarashtra of Mahabharata Vs Gandhi of Modern Bharat

Dhritarashtra wanted to see his unqualified and evil son happy at all cost, and so he did his best to snatch the rights of the rightful and fully qualified Yudhishthira and his brothers. He continued to do that as long as he could, and that finally got all his sons killed along with everyone else that he ever cared about.

Gandhi had a similar infatuation with the Muslims. He was willing to go to any length to satisfy Muslim aspirations even when sacrificing thousands of Hindu lives. Gandhi did everything in his power not to condemn any of the condemnable acts of Muslims while he remained very prompt to critique Hindus as soon as he got the slightest of the opportunities. Even after India Pakistan Partition, his Muslim appeasement didn’t stop. That became the driving factor for Nathuram Godse, who finally decided it was time to take the law into his hands and put Gandhi down.

Dhritarashtra’s love for his son got his son, his entire family tree erased from the face of the planet. He caused the ghastly war of Mahabharata, which claimed millions of lives.

‘Mahatma’ Gandhi and his love for Muslim appeasement in the 20th century of Bharat got our motherland partitioned where 20 percent of Muslims got 30 percent of India’s land, world’s first Islamic nation came into existence which would be a consistent pain for the rest of India for rest of its existence. That communal, Islamic nation was named Pakistan. Gandhi played an important role. Gandhi’s contribution to the creation of Pakistan is so significant that it won’t be an exaggeration to call him the ‘Father of the Nation’ of Pakistan. That is the nation whose true father was Gandhi!

The evil design of Gandhi’s appeasement for Muslims manifested itself in the world’s bloodiest and most gruesome Hindu-Muslim riots that claimed 3 to 4 million lives within months of Pakistan’s creation. Yes, if anybody should be held responsible for those lives lost, it must be Gandhi. But true to his character, he never learned from his mistakes because, to him, he was just infallible. And while trying to help his beloved Muslims, he even got killed.