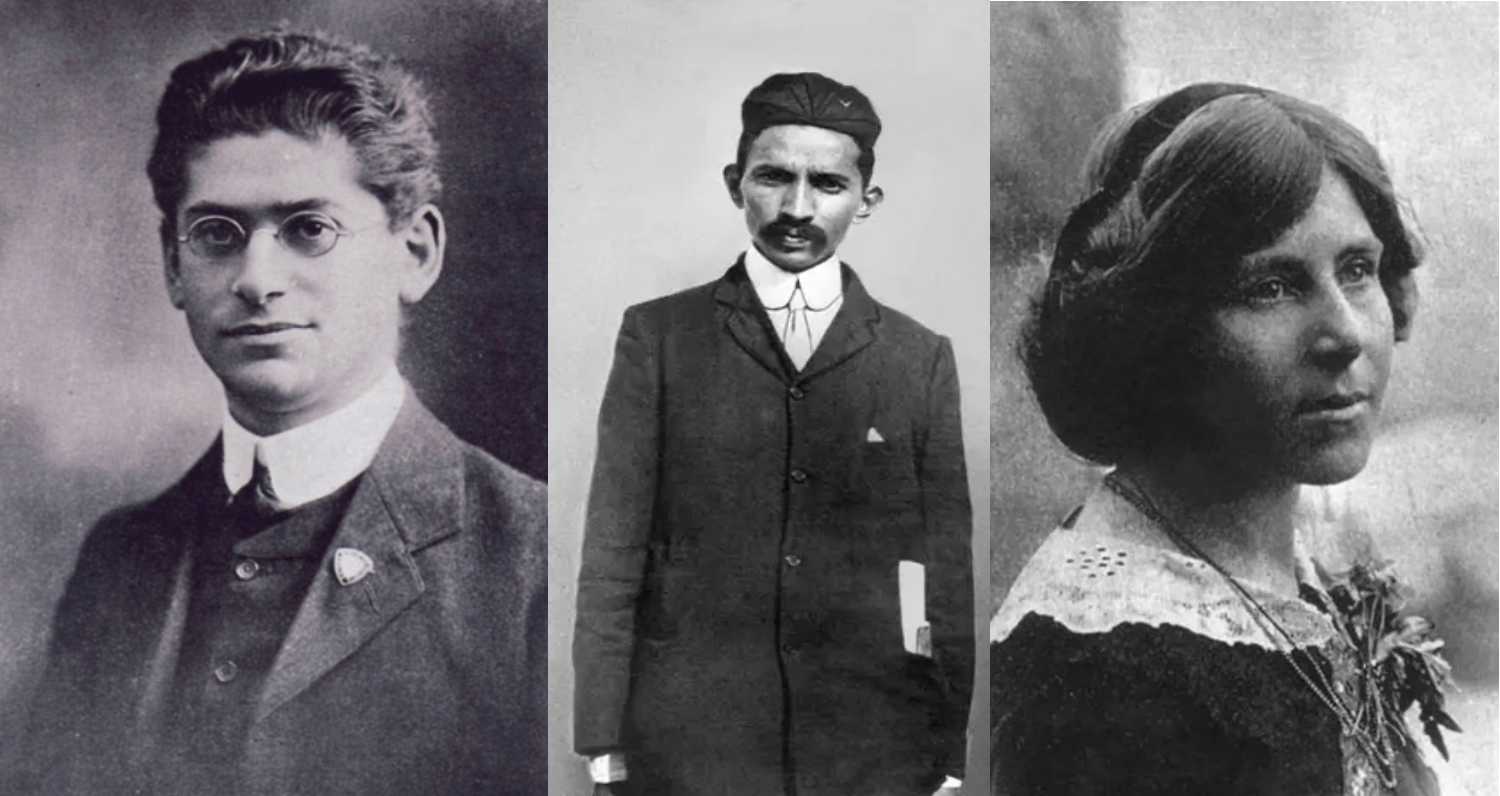 Gandhi’s colorful experiments with Celibacy have been a significant area of contradiction throughout his life and remain his most controversial legacy. This article discusses his affair with Millie Polak, the first of many others in whose life he deliberately inserted himself to get them closer to him.

Millie Polak was the fiancée of Henry Polak, who Gandhi called his ‘Chhota Bhai’ when she met Gandhi for the first time. Gandhi was aged 36, a married man with children and a wife when she came down to South Africa and got attracted to him in 1905.

In his book, ‘Brahmacharya Gandhi & His Women Associates,’ Girja Kumar writes about their first meeting when Gandhi received Millie Polak at the railway station in South Africa:

Henry and Millie married on 30th December 1905, but they were in the thick of public activities from day one in association with Gandhi. Millie joined Kasturba in performing household chores initially.

Gandhi was so excited that he called Millie “a most valuable acquisition of the family at Troyville in Johannesburg.’ He painted an ideal picture of his ‘heterogeneous family’ with no jealousies and hence ‘no rival rights.’ Also, he ensured that there was no immediate honeymoon for Henry and Millie. In hindsight, it appears that Gandhi knew what he was up to. Therefore the cunning man painted such high ideals in front of others to ensure that his wife and Millie’s husband would have a sense of guilt if they ever thought of opposing his inappropriate relationship with Millie.

When Gandhi was toying with different ideas about food, such as banning cow milk, then ban on onions, among other things, Millie was puzzled at these weird moves of him. For Gandhi, milk was the Viagra of his times. He was obsessed with food as much as he was with sex, and Millie was not OK with it. Interestingly, Gandhi was so dominant even then that nobody dared to question his decision. It looks like his desire to become the New Age Prophet was born somewhere around this time. The book has the proof in these lines:

She had begun to drift away from his murky world with all this. According to Millie, she hated his ‘life for the uncomfortable’. According to her, he was a masochist who liked to torture himself and torture others. She hated these things in him but did not leave him. They used to argue back and forth about the practice of Brahmacharya, which was his latest fad then.

Millie remained on his mind for many years. Gandhi would go out of his way during his early years of association with the Polaks to identify himself with Millie. It helped him get closer to her. He found elements in Millie that were missing from his life with Kasturba, the book says. Millie filled a gaping hole in his conjugal existence. This was just the beginning of many extramarital affairs that would dominate most of his life. He was just perfecting his methods of tactfully getting closer to other people’s women.

Poor Henry Polak did not understand what was going on in his backyard. At one time, he got so exasperated that he did not see the virtues that Gandhiji had discovered in Millie. Millie was too charmed by Mahatma, too, perhaps because of his continuous attempts to bring her closer through his many tricks. As Girja Kumar accurately describes, Gandhi was carefully interjecting himself into their marital life:

The differences between Gandhi and Henry began to widen, and at the root of this rift was most definitely, Millie. There cannot be a second thought tha

t no man can appreciate that his wife spends all her time with another man. But Gandhi ensured that the rift between Polaks widened because he saw his opportunity to get closer to Millie in that gap.

Gandhi, Millie, and Excitement in London during his 1909 Trip to England

Gandhi led a delegation to London to negotiate with the British Government, and Millie was somehow back in London for an extended visit to her family. Gandhi was very pleased with this ‘coincidence,’ and he took this opportunity to spend as much time as possible with her. Girja Kumar shares in the book about Gandhi’s excitement in his own words:

We all know Gandhi’s character when it comes to relationships. Especially during his experiments with celibacy days, he slept naked with women, bathed with them naked, and asked other people’s wives to give him a nude massage to him while still calling some of them his sisters, some of them his mothers, and some of them his daughters. When he called them those things, only God knows what these relationships meant to him because, in the real world, we have not heard a mother ask her adult daughters to do any of those things that Gandhi asked those women to do.

Anyways, back to Millie. So, Girja Kumar wonders if Gandhi was in competition with Henry for the attention of Millie? Was he looking forward to an assurance of her fidelity to him when he talked endlessly about her even after coming back to South Africa? Gandhi was forty by then, but he behaved like a teenager.

Gandhi called Millie his sister. But then he went on harping on his brotherly syndrome this way:

Though a brother could never replace a husband, I tried during my stay in London to replace Henry so far as I could. It was no more a wrench to you to separate from me than it was to me to separate from you. We certainly came nearer to each other in London than ever before. It was natural.

You are dearer because there is so much in common between us and because I have entered so much into your and Henry’s lives.

As any sensible husband, Henry had a reason to be jealous of him as Gandhi was not beyond attempting to create a rift between the couple!

But apparently, Millie was now losing interest in Gandhi and her personal life; her husband was getting back in her mind with time. By the end of 1909, Gandhi also began to realize that even though he had kept trying his best to keep her close. Girja Kumar shares this about that period: 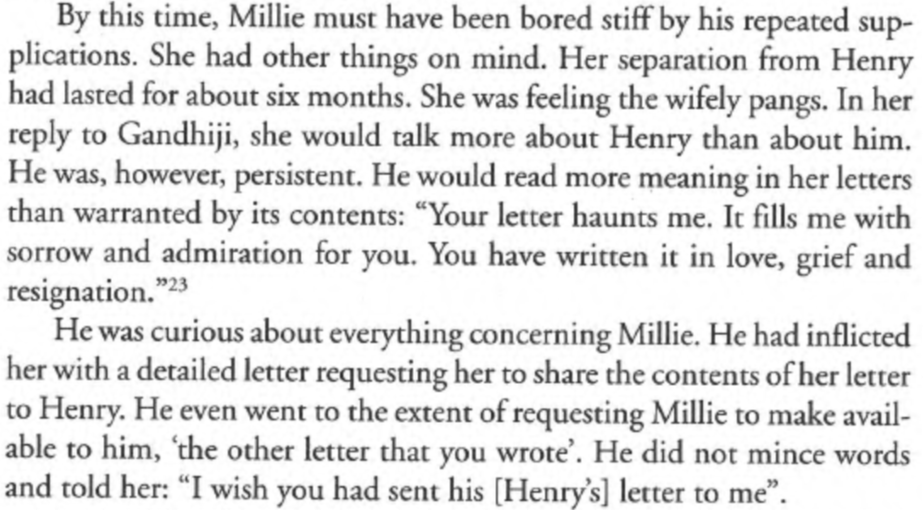 Millie stopped to write back. But that didn’t deter Mohandas Gandhi. He was persistent, and now he even tried to sow the seeds of doubt in Millie’s mind about her husband. Gandhi wrote to her:

Will you not have sufficient faith in him to know for sure that he is incapable of creating a gulf between you and himself.

I ask you to trust me never to carry Henry along any route without your approval…You have often given me the privilege of analyzing you to yourself. You have heroically sacrificed yourself on the altar of duty. But you have done so in bitterness, not always free from resentment.

This article only shows how Gandhi was a cunning but ordinary fellow with the same temptations as anyone else who wanted to get closer to the woman he liked by any hook or crook, like a villain from a Bollywood movie. This description of his relationship and correspondence with Millie only shows how much filth he had in himself and how he would take every opportunity, even to harm others for his temporary pleasures. He almost destroyed Henry’s married life with his infatuation with Millie even though Gandhi was already a married man who showed off to the world that he was practicing Brahmacharya.

Gandhi called Millie his ‘Sister,’ but his letters and his behavior toward her and Henry don’t demonstrate any brotherly love. He looks more like the villain of the Bollywood movie, Fareb (1996), in which the villain falls in love with someone’s wife and then tries to take her away from her husband.

No, for any sane person who has any education about social conduct, let alone Indian culture, will quickly realize that Gandhi was a conman who cheated India and Indians in a saintly dress. He was obsessed with sex and hunger for power over other people’s lives. He was physically weak, and therefore, he used his words to manipulate people and never hesitated to harm the very people who trusted him, respected him, and even worshiped him.